The Kim and Kanye Show 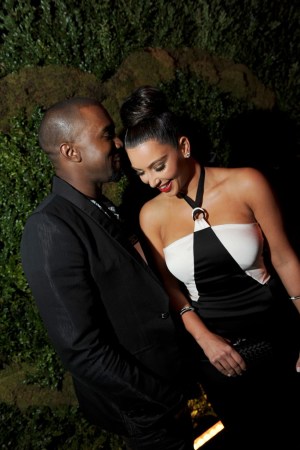 Chanel hosted its annual TriBeCa Film Festival Artists Program dinner on Tuesday night at Odeon, where a cross section of downtown New York turned out to honor participating artists such as Kara Walker, Nathan Sawaya, Cindy Sherman and Walton Ford. Given the cause, it was an appropriate setting for a stop in the ongoing public courtship of Kanye West and Kim Kardashian, which, in its short life, has at times felt like some sort of performance art piece.

Even before they arrived together — before they were besieged by photographers’ flashes while entering to the side of a hedgerow in a somewhat unsuccessful bid to avoid the red carpet, before they took their seats for dinner among tablemates Leelee Sobieski and Adam Kimmel, Camilla Belle and Naomi Watts and Liev Schreiber — West and Kardashian were, thanks to Twitter, the talk of the party. The Chanel dinner marked the second public outing in as many days for the couple (or whatever it is they are, exactly; neither has seemed eager to confirm much). The pair had appeared hand-in-hand at the opening of Kardashian family player Scott Disick’s new Manhattan restaurant, RYU, on Monday. A few hours earlier on Tuesday, the E network said it had re-signed the extended Kardashian clan for three new seasons of its flagship program for a reported $40 million.

“We’re so excited, we’ve been doing this for a long time now, we’re all really excited,” Kardashian said, as she made her way into the packed restaurant in a form-fitting black and white Chanel cocktail dress. “We’re all in New York right now, the whole family’s here. You know every day we’re together it’s a big celebration. We celebrated last night for Scott’s opening. It was [also] kind of, you know, for the new deal.”

Though Kardashian is obviously acclimated to life in the augmented-reality terrarium at this point, three years still seemed like a long time to sign on for in one swoop.

“It’s three seasons, so that’s really a year and a half,” Kardashian corrected as West remained characteristically press shy at her side. “I’d like to be a little bit more behind the camera, which I’m in the works of doing, but I’m fine with it. I love it.”

And she did appear to be in midseason on-camera form. WWD ventured that maybe the media interest in her relationship with the gentleman standing at her side had helped with that.