The Kills Kill at The Top of The Standard

The band played a starry bash at The Top of The Standard on Thursday. 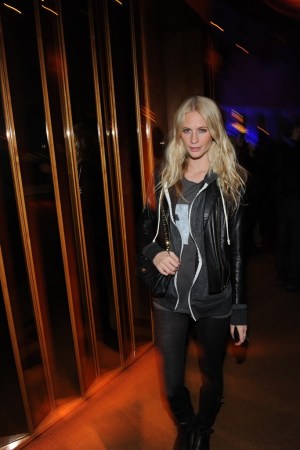 It was not easy to find anyone at the Top of the Standard Hotel for the DeLeón Tequila fashion week kickoff party on Thursday night, though not for lack of attendees. Seemingly hundreds of revelers streamed into the lounge to swill tequila and await a performance by Jamie Hince and Alison Mosshart, also known as The Kills, who would not appear until midnight. Here and there through the crowds of dancing partygoers one could spot a familiar (generally much-photographed) face: There was Alexa Chung wearing overalls and shimmying near the DJ; Alexander Skarsgard, besieged by female admirers by the bar; Erin Wasson, celebrating her recent Vs. Magazine cover with photographer Jenna Elizabeth and rocking out by the stage; Poppy Delevigne, grinding up against a male friend; Penn Badgley and Zoe Kravitz, close-talking in a booth. There was even a glimpse of Lindsay Lohan, in a blur of denim, corset and hat, skittering through the crowd toward the exit.

“They’re so, so good,” Alexandra Richards shouted above the music during the hourlong set, as Mosshart crooned in her throaty growl and flipped her mop of thick (recently dyed pink) hair back and forth. “It’s all about those hair flips,” Elizabeth swooned as the band slipped into a rendition of Patsy Cline’s “Crazy.” “Timely, for Valentine’s Day,” the photographer shrugged of the song choice, “though I think most of this crowd probably forgot that’s happening next week.”