On Wednesday night, the hotel hosted both Sol LeWitt’s outdoor installation “On the Walls of the Lower East Side” and ACRIA’s young friends dinner. 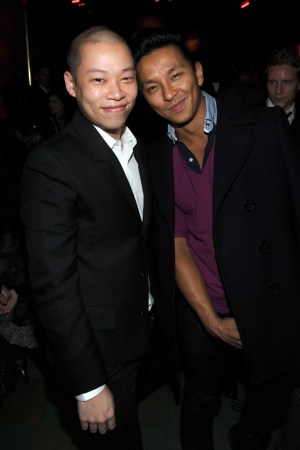 Civilian DJs were the trend Wednesday night at Mondrian Hotel in New York’s SoHo, where party photographer Rachel Chandler manned the decks for the small fete at its bar, Mister H, in honor of Sol LeWitt’s outdoor installation “On the Walls of the Lower East Side.” Marilyn Minter, Fabiola Beracasa and Marco Brambilla were on hand for the Sol LeWitt bash. Brambilla was seated underneath a projection playing against the heavy folds of a curtained wall near the bar, discussing his upcoming 3-D video installation “RPM” for Art Basel in Miami next month.

Upstairs in the penthouse, the Young Friends of ACRIA dinner was held across two long banquet tables set for about 20 people each. The panoramic city view was not hindered by the grisly weather. Guests shared plates from the hotel’s restaurant, Imperial No. 9, and, in the case of Waris Ahluwalia, occasionally tossed large orange gerber daisies torn from the centerpieces across the table.

Prabal Gurung was only moderately put out when the nearby Chris Benz won a weeklong stay at an Aspen resort (donated by Kiwi Collection, which co-sponsored the evening). Rogan Gregory was specterlike at a far table by the window where he kept his rabbinical flat-brim black hat on throughout the evening pulled low over his eyes.

The real interest as the night progressed was on the floor below, where rumor had it that Justin Bieber had crashed for the night. After dinner, with plots of luring the young singer out for a performance thwarted, the dinner party headed back down to Mister H for the after party, to shimmy along as photography agent Jen Brill DJed.