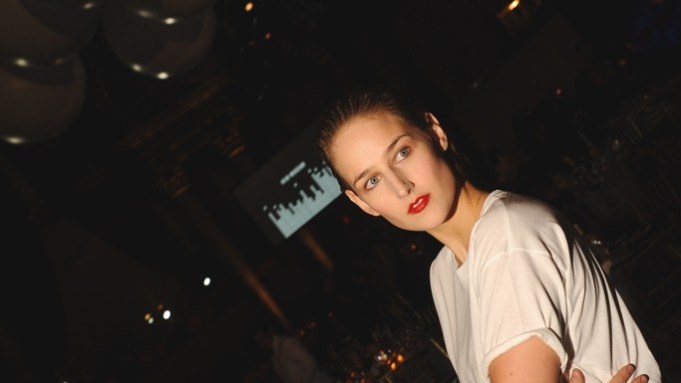 On Wednesday night, the New Museum honored the audio and visual artist Christian Marclay at its annual spring gala at Cipriani Wall Street in Manhattan. Marclay’s best-known work, the 24-hour film pastiche “The Clock,” which re-creates a day through film time references, was on the minds of several partygoers. Proenza Schouler’s Jack McCollough explained that he couldn’t get in to see it when it screened at Lincoln Center and MoMA last year. “It became such a…you couldn’t get in. It became such a New York ‘thing,’” he explained. “We unfortunately were locked in the office the whole time. Even if we wanted to, we couldn’t escape.”

McCollough was serving as an honorary cochair for the evening along with partner Lazaro Hernandez. Others in the arts-and-fashion crowd in attendance included Cindy Sherman, Annie Leibovitz, Tory Burch, Yvonne Force Villareal, Francisco Costa and Fabiola Beracasa.

During cocktail hour, John Waters explained that he had some experience with “The Clock.”

“I was on the jury at the Venice Biennale that gave him the main prize,” the director said. In fact, Marclay had sampled a scene from Waters’ “Polyester” for the work.

“So, yes, I have definitely seen it, but, no, I did not watch the entire thing,” Waters continued. His last 24-hour art film experience had been Andy Warhol’s “Four Stars,” he said,

“I did see that — in and out,” he laughed. “Nobody stayed the whole time because everybody was on amphetamines.”