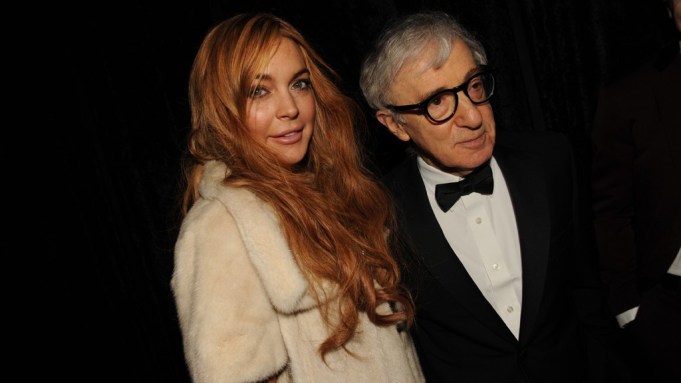 As guests at amfAR’s annual New York Gala made their way into Cipriani Wall Street Wednesday night, they passed a somewhat ominous bit of signage. “Please be advised that we will be using strobe lights, lasers and fog machines during tonight’s programs,” it read. Taken together with a public address announcer who extolled cocktail hour laggards to their seats by repeatedly advising that the program was “imminently” about to begin and a DJ who leaned heavy on a techno reworking of “Night on Bald Mountain,” the proceedings were a bit foreboding early on. Later, not so far from said sign, the delightfully weird friendship of Woody Allen and Lindsay Lohan (first spotted at the same party a year ago) continued to blossom.

Fashion week had officially begun in New York. The AIDS research charity’s annual party has long been a type of kickoff to February show season. This year it served as the accredited opener: Mercedes-Benz New York Fashion Week had arranged for the gala’s red carpet to serve as the site for its ribbon cutting, and Mayor Michael Bloomberg made with the ceremonial shears at 6:45 p.m. Within an hour or so, the gang was all there — from designers (Donna Karan, Michael Kors, Olivier Theyskens, Zac Posen) to models (Karlie Kloss, Ginta Lapina, Daria Strokous) to jet-setters (Courtin Clarins, Roitfelds and at least one Delevingne). Hosted by a rotating cast of fashionable New Yorkers who included Sarah Jessica Parker, Andy Cohen and Alan Cumming, the black-tie event honored Heidi Klum and Janet Jackson for their work with amfAR, as well as the organization’s longtime chair Kenneth Cole, who was introduced by brother-in-law and New York governor Andrew Cuomo.

“Well, I have a lot of dates tonight: Karlie and Heidi and Patricia Clarkson,” Kors said, before summing things up pretty neatly on his way in. “That’s a lot of dates. You know what? I love women. I love seeing them all looking so great. And it’s such an amazing night.”

During her ad-libbed acceptance remarks, Klum noted that she was 12 years old and in a kissing phase with her first boyfriend when the AIDS crisis began to make headlines. She recalled going to the bathroom to rinse her mouth out after make out sessions. It was a cute story that underscored how much work amfAR and like organizations have done to raise awareness in the last 30 years. (Wednesday’s gala raised $2.6 million.) But it also left one wondering about the fate of the boy who was Klum’s first boyfriend. Surely that guy had some stories.

“And a lot of photos to prove it,” Klum laughed later on in the evening. “It’s actually amazing that some of those photos have never surfaced over the years.”

Nearly four hours after the ribbon cutting, Cee Lo Green finally made use of those strobe lights, lasers and fog machines with a short set that closed out the program. As he ran through hits like “Crazy” and “Forget You,” guests danced, made for the coat check or performed some combination thereof.