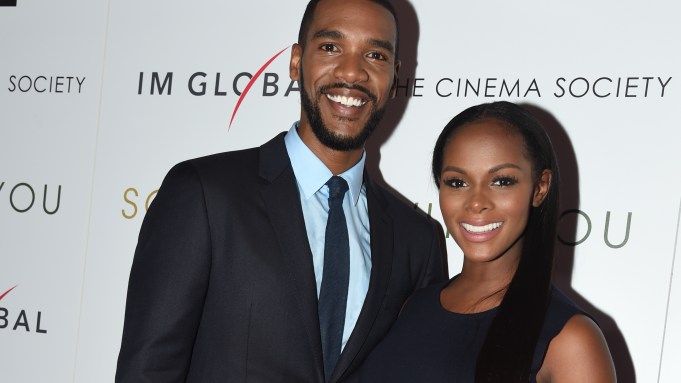 “I just think it’s a great love story,” said Tika Sumpter Wednesday evening from the red carpet at the Cinema Society’s New York premiere of her film “Southside With You.” Sumpter, also a first-time producer of the film, plays second-year legal associate Michelle Robinson, who agrees to spend an afternoon with the charming young summer associate at her Chicago firm, Barack Obama, played by Parker Sawyers. “Any actor would be lucky to play these two parts,” Sumpter continued. “And it just happened to be us. I think anybody will be able to relate, no matter what side of the alley you’re on. It’s not political at all — I mean, they talk about things in the future, but it’s not a wink-wink movie, it’s not [about] red state, blue state — it’s really a story about forgiveness, love, walking in somebody else’s shoes. And I think any human being can relate to that.”

The story of the President and First Lady‘s first date stood out to writer and director Richard Tanne from the moment he heard it. “It must’ve been in an interview,” he said of how he learned the story. “There was some anecdote they gave about the first date. They’ve been very public about it. The dynamic of the date [was interesting], because by her account Michelle wasn’t interested at first, and [Barack] had one date to kind of make his case and prove himself as worthy — and by her own admission he had done just that. It felt like a classic romantic movie.”

The film debuted to critical acclaim at Sundance, and arrives in theaters this Friday. “I wrote it with Tika in mind, because I had met her before I went off to write the script and I thought she’d be great for the part” Richard Tanne said ahead of the screening, after which the crowd continued onto the yet-to-open Harold’s Meat + Three at Arlo Hudson Square. “And for Barack, it was sort of one of those big question marks of who was going to be the person to take care of this role. I wanted basically who Sawyers] is. A total unknown, a total discovery, who comes out of the gate with a brilliant performance.”

“When I first read it, because it was so much dialogue, I was like, ‘How is this going to work?’” said Sawyers. “But then, when I really drilled down into it, and understood the nuances and the conflict between very simple exchanges, I was like, ‘This would be really interesting as an actor.’”

Sawyers originally approached the role as an impersonation, but soon abandoned that approach in favor of embodying a young man with all the confidence but none of the power the Obama audiences today know. “I just focused on being 28, and trying to impress a woman, and his confidence and so forth, at 28, without the presidential or senator title,” Sawyers said. “Rooting it in ‘I’ve been around the country, studied hard, I know myself quite well, and I walk around like this at 28.'”