The museum held its annual summer fete on Saturday, a first in its new Water Mill building. 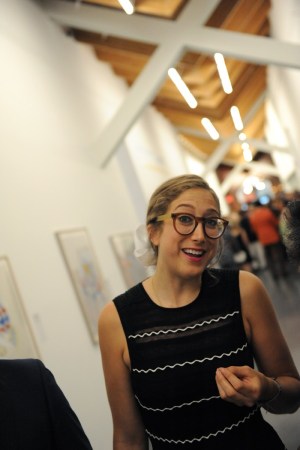 Sheets of fog hung over Water Mill, N.Y., on Saturday night, robbing attendees of the Parrish Art Museum’s midsummer party of the cocktail hour sunset that the institution’s sleek new design was meant to play upon.

“Well, the weather is not ideal,” the museum’s curator, Terrie Sultan, said before the seated dinner and subsequent after party. “The natural light [here] is really spectacular for viewing the art,” Sultan noted, posing with Josephine Meckseper by one of the latter’s works, several of which are on display in the outdoor gallery, lobby and permanent collection galleries until Oct. 14. “You’ll have to come back when the sun is out!” Sultan added. The Herzog & de Meuron-designed museum holds more than 2,600 works ranging from early-19th-century landscape paintings through American Impressionism and into the 20th and 21st centuries. It was inspired by Long Island artist studios and what Sultan called the East End’s “generation-spanning creative legacy.” Its 34,000 square feet are oriented from east to west to incorporate huge northern-facing panels of glass, intended to channel the light that the collections’ artists (works by William Merritt Chase, Fairfield Porter, John Chamberlain, Chuck Close, Eric Fischl, April Gornik, Elizabeth Peyton, Dan Flavin, Roy Lichtenstein and Willem de Kooning are among those in the permanent collection) would have used in their own studios.

The invitation had specified cocktail attire, and the event showed some of that term’s many possible interpretations. A few revelers wore floor-grazing gowns with bedazzled décolleté, some sported elaborate sequin frocks with glitter-glazed cleavage to match. “It’s an art party, you’re going to get a good mix of people,” Debbie Bancroft said of the crowd. Partygoers like Nicole Miller, James Frey, Sharon Bush, Andrew Lauren, Jamee Gregory, Lisa Anastos, and Kathy and Rick Hilton clotted around cocktails, canapés and a lone, Windbreaker-sporting guitarist (later identified as the Dirty Projectors’ David Longstreth) along the central spine of the space, mingling with artists like Cindy Sherman, Richard Phillips, Meckseper and Ross Bleckner.

Dorothy Lichtenstein walked through one of the 10 dimensioned galleries with Agnes Gund. “The space is very complimentary to the art,” Lichtenstein mused, pausing by a large de Kooning. A pair of revelers were taking turns photographing each other mugging in front of a work on the opposite wall.

“It’s just a startlingly great space to show art,” Phillips said of the building, standing in between a pair of Meckseper works, one wall-bound and incorporating the Jeep insignia and a series of men’s neckties, the other a crushed red truck in the center of the room. “The whole thing, the clean lines, the sparsity of it, it’s…perfect.”

The Parrish’s previous incarnation in Southampton was a little different, Jill Stuart explained, passing an introspective Sherman on her way to dinner. “It was charming…but a bit cramped in comparison.” Stuart, who is bound for a beach vacation on the Greek island of Patmos, raised her eyebrows as if to encompass the Basel-born vaulted roof above her head, adding, “You’d have to imagine that most things would be cramped in comparison.”