The Party Hopping Begins at Cannes

Calvin Klein and Louis Vuitton were among those getting in on the action. 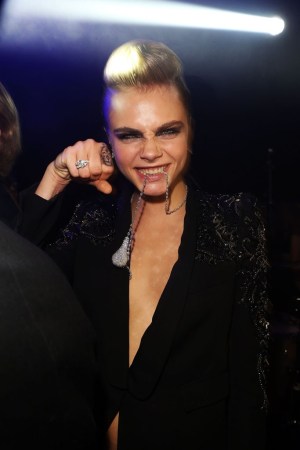 CANNES, France — The rain in Cannes did not stop the party hopping on Thursday night, though it left some in a less than sunny disposition.

The evening kicked off at the Martinez hotel, where Oscar winner Colin Firth handed the Chopard Trophy award to rising talents Jeremy Irvine and Blanca Suárez. It turns out Irvine and Firth are well acquainted — they play the younger and older version of the same character in the upcoming “The Railway Man,” about a World War II prisoner of war.

This story first appeared in the May 20, 2013 issue of WWD. Subscribe Today.

“We spent a lot of time rehearsing in his living room at his house, and he was very, very kind to me,” Irvine said. “He’s very paternal in the way that he works with young actors but also he’s got a very wicked, naughty sense of humor, so that makes it very fun.”

Further down the Croisette, the cast of Sofia Coppola’s “The Bling Ring” huddled on VIP banquettes indoors as rain pelted the Bulgari Rooftop, Albane Cleret’s temporary nightclub at the Marriott hotel. Louis Vuitton chairman and chief executive officer Michael Burke made a lightning visit to the Riviera resort to greet guests at the film’s after party, hosted by Vuitton, Pathé and W magazine.

While “Bling Ring” star Emma Watson shunned press, Cannes newbies Taissa Farmiga and Katie Chang were still buzzing from their walk up the red carpet. “I don’t even know how to feel, I can’t believe I’m here,” marveled Farmiga.

Chang’s next project is studying creative writing at Columbia University. Working with Coppola has inspired the actress. “She really wants to hear your opinion, and as a teenager, that’s nice. We’re not used to people wanting to know our opinions,” she said.

Down the seafront, Nicole Kidman, Carey Mulligan and Rooney Mara were some of the women in film being honored at an event hosted by Calvin Klein Collection, Euphoria Calvin Klein and the Independent Filmmaker Project. Mara, who is the face of Calvin Klein’s new fragrance Downtown, said she looked up to actresses like Katharine Hepburn, Audrey Hepburn and Gena Rowlands.

Mara, who was staying in town for the premiere of “Ain’t Them Bodies Saints” as part of Cannes Critics’ Week, joins a female cast including Amy Adams, Olivia Wilde and Samantha Morton in Spike Jonze’s upcoming movie, “Her.”

“Sadly, I really didn’t get to work with the actresses,” she said, declining to reveal any more about her role.

Energized from dressing Kidman for the first time, Calvin Klein Collection creative director Francisco Costa talked about designing costumes for a film. “I would love to do a project, definitely,” he said, scanning the room. Naomie Harris, another of the night’s honorees, said her icon was Meryl Streep. “I love how hard she obviously works, but also what I really love is that she makes it look joyful as well, as though she’s having so much fun with it,” the “Skyfall” star explained.

Harris recently tackled a meaty role of her own. She will be seen as Winnie Mandela in “Mandela: Long Walk to Freedom,” alongside Idris Elba.

“It’s the most challenging role that I’ve ever played and the role that took me to the darkest places. I feel almost scarred by it still, because it was really harrowing,” she said. “The people that you’re representing are true icons — and we don’t have many of those.”