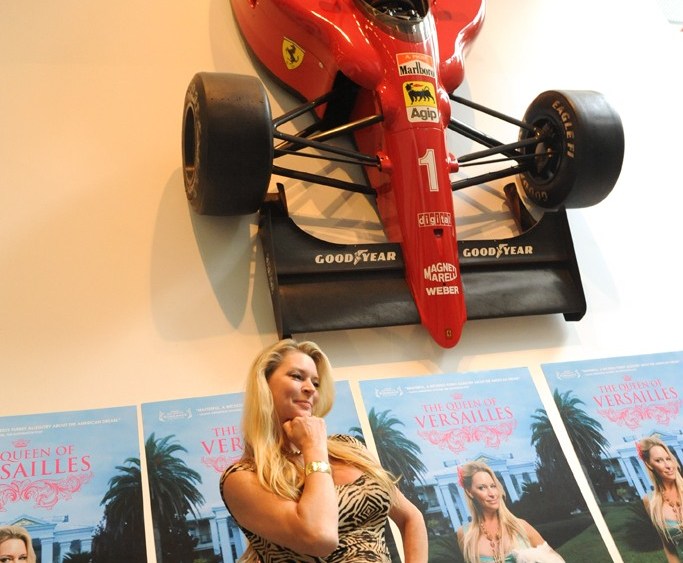 The Palace of Versailles, one of France’s national treasures, nearly bankrupted the French government under Louis XIV. At the New York premiere of “The Queen of Versailles” on Tuesday night — Lauren Greenfield’s documentary about time-share titan David Siegel, his buxom trophy wife Jackie and their own “Versailles” — history tops itself.

“You can now own ‘America’s Versailles’ for $100 million dollars,” a realtor beams during the documentary, producing an illustrated pamphlet of an unfinished 90,000-square-foot single-family home, pronouncing the French with a hard “s.” The film, which won Greenfield a best documentary director award at the Sundance Film Festival and an ensuing lawsuit from David Siegel for defamation, follows the Siegels as they attempt to build the largest house in America in Orlando, Fla. They are inspired both by the Palace of Versailles and the Paris Las Vegas Hotel. The couple explains during the film that they sketched their dream house on cocktail napkins from a suite at Siegel’s ill-fated PH Towers Westgate on the Las Vegas Strip. The resulting architectural style might be described as “Disney-French.”

“This is a movie about dreams, both individual and collective, and what happens when life doesn’t go as planned; what is lost and what is found along the way,” Greenfield said, noting that she met Jackie Siegel while photographing Donatella Versace for a project about “wealth and consumerism and the American Dream.”

A photograph Greenfield took of Siegel’s “gold, blingy” Versace purse was published by Time magazine to illustrate what the publication called “The New Gilded Age” in 2007.

“She told me about building the biggest house in America and I was hooked,” Greenfield continued. “I had long been interested in this connection between the American dream and home ownership and the way that the home had become this expression of self and identity and success…they were kind of building the ultimate dream.”

Greenfield has previously published photographic collections about growing up female in America with “Girl Culture,” eating disorders in “Thin” and teenagers in Los Angeles with “Fast Forward.”

About a year into filming, the structure is half-finished when the housing bubble bursts, leaving a $100 million folly of gigantic proportions. The Siegels are forced to list the unfinished property for $75 million, and the film closes with the banks circling, as Jackie Siegel puts it, “like vultures around a dying animal.”

“In the end, it wasn’t even about rich people, it was an allegory about the overreaching of America,” Greenfield noted to an audience that included Harry and Peter Brant Jr., Nicole Miller and Dennis Basso.

Still, the film is very much about “rich people.” The Siegels’ somewhat blind attempts to make sense of life as no-longer-billionaires see Jackie blithely asking her youngest children what it felt like to fly commercial, or asking a Hertz representative at the airport what her driver’s name is. David Siegel is mostly depicted barking at his family from his retreat in a dimly lit room covered in paperwork, where, he tells the cameras, he intends to “find the money.”

“In the beginning this was a ‘rags-to-riches’ story,” the self-made Siegel tells the cameras, “now it may be a riches-to-rags story.”

Their eight children (including a niece they are raising) might have to go to college now, Jackie notes. There are stretch limousine rides to McDonalds; shopping sprees at Wal-Mart; overextended household staff (one of whom happily lives in the children’s playhouse), and a variety of taxidermied lapdogs and oil-painted portraits of the Siegels (as a gladiator and Roman Empress, among other poses) that had an audience — including those famous for their refined tastes (Mario Buatta, Muriel Brandolini and Todd Oldham were all seated within the same two rows) — stifling horrified laughter. Upon the film’s finish, one voice rang out in the still-dark theater: “Well! I feel like I just got hit by a bus.”

Despite the aforementioned lawsuit, Jackie Siegel herself was on hand at both the screening and the after party at the Royalton. She was accompanied by Kathy Hilton, who noted, “It’s a very moving film to watch.”

Siegel demurred from speaking to press at the party, saying only that “it was a very difficult time in our lives.”

Greenfield surveyed the Royalton from a table toward the entryway, waving lightly at Siegel and Hilton, who posed for photographers. “I have a lot of affection for Jackie and the family,” the director said, “that made me want to tell their story in a way that created empathy, and that’s the biggest reaction that I’ve gotten to this film — that people go in thinking that they might never relate, and they come out thinking that [the Siegels] are surprisingly likeable. I think Jackie and David have a unique quality where their virtues and flaws allow us to see our own.”

“[David Siegel’s] upset now, but he wasn’t during the making of the film,” Greenfield stiffened slightly. “He just doesn’t like the ending. He wanted it to end with him coming back triumphantly. And for me it was like, it started on the dream and it ended.”