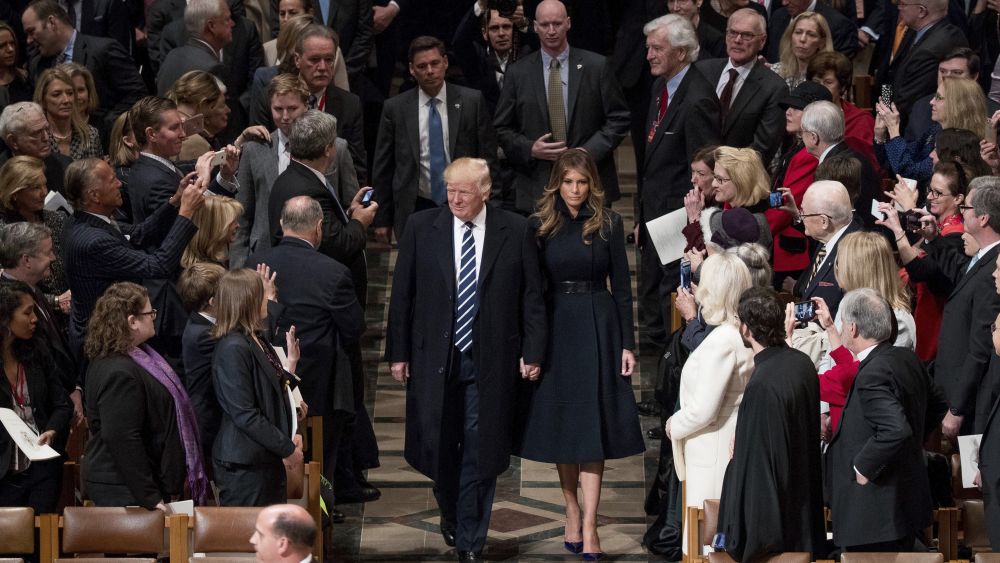 At 10 a.m. on Saturday morning, as thousands of sign-toting women in pink “pussy hats” gathered at Independence Avenue SW and 3rd Street SW, the newly minted President Trump and his family were across town at the national cathedral, attending the national prayer service. Although, as the afternoon went on, the city would be filled with the music of Madonna and Alicia Keys, chants, cheers and shouts, the scene outside the cathedral remained rather hush.

Police and secret service stood guard, and people — both neighbors and those who sought out the cathedral, hoping for a sight of the president — gathered and stared in curiosity, as C-SPAN buses churned nearby. The First Family would later exit through a side door, preventing the photo ops many had hoped to capture — but a few protesters made up for it with their looks.

A man in a polar bear suit held a sign declaring “God Help Us,” which was a hit with the assembled crowd. Standing with her parents, a young girl carried a sign that read “Trump eats pizza with a fork, enough said,” and a group of friends all shared one that said “church won’t save Trump.”

They stood side by side with Trump supporters, some who wore “make America great again” hats, some who simply gave away their political leanings with their facial expressions. It was a contrast from the previous night, when, en route to the inaugural balls at the convention center, attendees in black tie walked with protesters who posted up near the venue. “I was a little surprised they had us walking in together. They were in front of me and behind me, and I was really confused — I felt like my back was against the wall,” one such attendee said Friday from the Liberty ball. And the protesting would continue later, of course, but Saturday morning’s cathedral gathering was minimal. As one runner, who stopped his route to linger at the scene, put it, “it takes a lot to be pissed off in the morning, you know?”

Before the crowd realized they wouldn’t be catching a glimpse of President Trump, a few of Trump’s fans started befriending one another. A woman in the signature red baseball hat saddled up to a family with a golden retriever on a leash; the dog, she was delighted to learn, was named Rudy Giuliani.