The Selfie Set Out in Force at Coachella Fetes

Partygoers hit the Guess Hotel affair at the Viceroy, the Stylebop.com party and the Marc by Marc Jacobs Eyewear bash at the Ace Hotel. 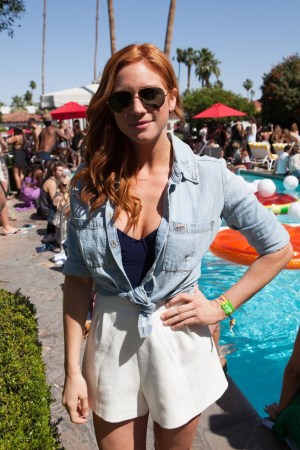 With temperatures hovering at a sweltering 90 degrees, festivalgoers flocked to poolside fetes throughout the Coachella Valley. Guess kicked off Day One of its two-day Guess Hotel affair at the Viceroy in Palm Springs, drawing Camilla Belle, Hannah Simone and a newly-engaged Jamie Chung. Partygoers packed like sardines along the water’s edge, hoping to catch the perfect selfie moment against the inflatable toy-filled pool backdrop, more reminiscent of spring break than a music festival weekend. Wearing a Guess shirt, Finders Keepers bathing suit, and Tory Burch shoes, Brittany Snow popped into the VIP gifting suite to view the festival-appropriate outfits on display. “I’ve come here before and I’ve raged a lot more,” admitted Snow, who said the Guess party was the only event on her radar outside the festival. “Because I’m older, I’m a little more tired,” laughed the actress, who is on a week-long break before heading back to Baton Rouge to film “Pitch Perfect 2.”

Stylebop.com, Harley Viera-Newton and Langley Fox Hemingway also hosted a bash at a rented estate that drew Caroline de Maigret, Rebecca Dayan, and Lily Kwong as well as musicians Dev Hynes of Blood Orange, Z Berg of The Like and Mickey Madden of Maroon 5. Guests sat in teepees on the lawn and listened to the musical stylings of Ramona Lisa, aka Caroline Polachek.

The selfie set was also out in full force at the Marc by Marc Jacobs Eyewear bash at the Ace Hotel & Swim Club, where guests were encouraged to “Tweet to Treat” by posting a photo of themselves to social media with the hashtag #MBMJSunnies in return for a frozen lemonade (the rare camera-averse left the affair thirsty). Guests including Clint Eastwood’s daughter, Francesca, and Jesse Metcalfe wandered through the brand’s pop-up sunglasses boutique and hung poolside as fellow attendees indulged in a game of life-size Jenga and ping-pong on a pastel-colored table. Also in attendance was Nicole’ Richie’s 15 year-old sister Sofia Richie, who stood out from her peers with her sophisticated outfit pairing of a Topshop tee, Opening Ceremony skirt, Balenciaga sandals, topped with Cartier bracelets and House of Harlow necklaces. “I’ve got to rep my sister,” she explained. The budding fashionista is also a Coachella vet, marking her fourth year at the festival. “My sister came for a long time, so I was one of those raver babies out in the crowd [with her].”