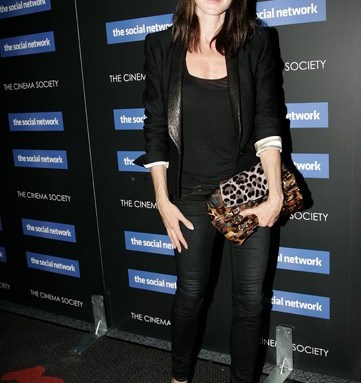 Wednesday evening, The Cinema Society gave Facebook addicts yet one more thing to write about when it hosted a special screening David Fincher’s “Social Network” at the SVA Theatre. The film explores the roots of Facebook’s development in the dorm rooms of Harvard University (taking some liberties with factual accuracy). As cast members Justin Timberlake and Jesse Eisenberg posed on the red carpet, along with the movie’s screenwriter Aaron Sorkin, it seemed only apt to query the celebs in attendance on their most recent status updates.

Lance Bass: “I don’t even know. I probably said something like, ‘I’m so excited to see The Social Network.’” Cameron and Tyler Winkevoss (twins portrayed in the film by Armie Hammer): “I put the actual trailer for ‘The Social Network’ as my status update.”

Aaron Sorkin: “I only got Facebook while I was working on the film. Before making the movie, I understood Facebook as much as I understand the purpose of the carburetor in my car.” Gabourey Sidibe: “My most recent status was X-rated, I’ll tell you that.”