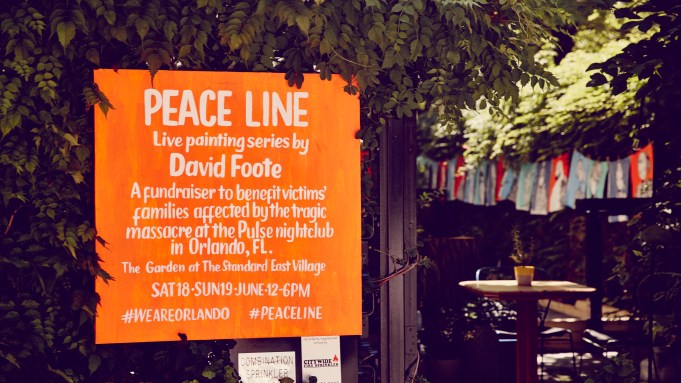 “Art has always been a vehicle of consciousness and awareness,” Matthew Hunt said Sunday from the garden at the Standard East Village. Hunt was cohosting day two of the weekend’s fund-raiser for the families of the Orlando, Fla., massacre victims, called Peace Line. Guests were welcomed into the back garden at the hotel where painter David Foote was working and selling his pieces for the cause.

“We’re doing this to benefit the families, to pay for the funeral services,” Foote said. The event launched last weekend as a fund-raiser for another charity, but in the wake of Orlando, “it doesn’t make sense to [raise funds] for anything else right now,” he said. “We were, like, ‘why don’t we do something positive where people can come and enjoy’ — there’s only so much sadness that you can take.”

Hunt shared that sentiment. “Even if it’s not a fortune of money raised, it raises awareness that you can’t just sort of for 10 hours be like ‘this is really terrible’ and then go back,” he said. “Because that’s what’s happened every single time something terrible happens — there’s no progress, there’s no change.”

Saturday’s pop-up drew some 300 visitors, and about 20 paintings were sold. Foote, a former fashion illustrator, displayed his pieces hung from clothing lines; the paintings showed women in marine-themed setups, while the men were done “flowerlike, pairing up super masculine with something super feminine,” he said.

Over the course of the weekend, in addition to Hunt hosts included Timo Weiland and Poppy King.