Ice Capades at The Standard 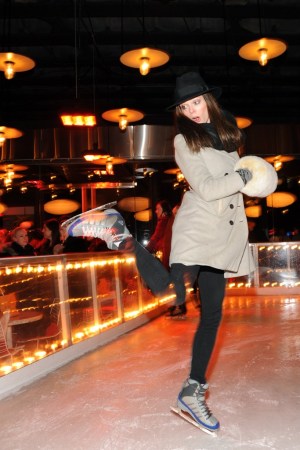 Wednesday night found revelers on ice at The Standard for the hotel’s Midwinter Skate Party. Chrissy Teigen and Coco Rocha both circled the small rink endlessly, the latter kitted out in a fitted swing coat and white fur muff only stopping occasionally to pose for photographers. Ric Pipino, Lorenzo Martone and Miguelina Gambaccini sampled flutes of Veuve Clicquot (the evening’s sponsor), rum-spiked hot chocolates and après-ski-style hors d’oeuvres such as miniature cheeseburgers and shot-glass-size cups of soup. Fondue was served inside the hotel lobby, along with braised short ribs. The whole affair felt decidedly Swiss.

“Châlet chic…,” Johnny Weir mused inside, with a wiggle of his eyebrows. The ice-skater was the evening’s entertainment: He and Sasha Cohen were set to perform at 9 p.m. No stranger to a little glitter and flounce, Weir looked surprisingly demure draped in a striped Gareth Pugh sweater-cape over a black spandex shirt and ribbed leggings that accentuated his leg muscles. “We’re dressed like this, Sasha and I, because, you know, it’s winter in New York and we want to blend in with the party. The sparkly little skating outfits are a little too cold for this weather. I don’t want insurance claims filed against me for hard nipples,” Weir said as he rubbed his pectorals thoughtfully with both hands. WWD pointed out that a few people at the party were sporting less coverage than a typical skating outfit, with the illusion netting and control-hosiery implied therein. Weir laughed, “True…and the sparkly little outfits, well, they are good for any occasion. As long as I’ve got my fur, I’ll be fine.”

As the merriment built, and the crowd around the bar hut thickened, small red fleece blankets were pulled across laps and the heat lamps were turned up to combat the chill. Weir and Cohen took to the ice and spun around the rink to Adele’s “Rumor Has It.” Weir had ditched his striped topper for a pair of shaggy black fur cuffs. André Balazs looked on. “I’m a good skater, but they’re something else, you know. They make a big ado,” the hotelier said, as Weir posed for photographers with one hand under his chin and the other on his waist, his rosy pout, “about everything.”