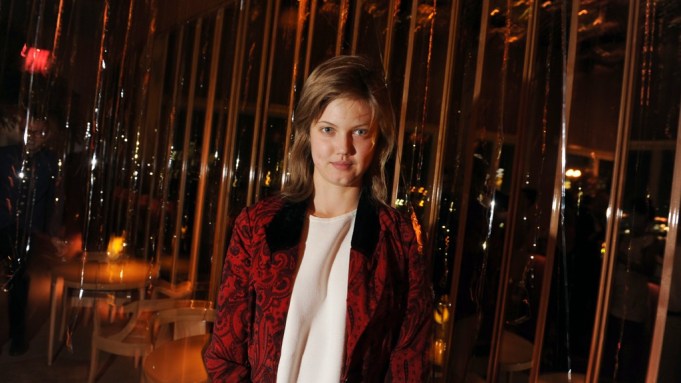 In the realm of Manhattan night life that occurs in the heady little bend west of Tenth Avenue and south of 21st Street, four years counts as an eon. Nightclubs, like newborns, tend to count their ages in months. So it was with an air of earned achievement on Thursday night that the Top of the Standard, the long-reigning, well, standard for a certain type of New York party, celebrated its fifth New York Fashion Week opening fete at the start of its fifth year of existence.

Befitting a second inauguration, the crowd on Thursday was a watt or two dimmer than the first go-round in September 2009, when Madonna and a still-ascendant Lindsay Lohan were on hand, and it was still officially called the Boom Boom Room. Still, there were plenty of boldface names playing amid those ever-present mirrored walls and familiar leather banquettes: Karen Elson and Tabitha Simmons, Dean and Dan Caten, Zachary Quinto, Richard Chai and Waris Ahluwalia, among others.

From the class of 2011 came Nick Gruber, the former boyfriend of Calvin Klein, no longer tied to the designer, who has been trying to recapture his earlier star shine as a tabloid fixture as of late. Count Gruber in that group of New Yorkers who’ve wanted a peek at Klein’s $75 million Hamptons compound but have yet to be invited inside.

“I have not been to his house. I helped design the house. I had a strong input on the garage,” he said.
A card-carrying member of Boom Boom’s inner sanctum, Italo Zucchelli, director of men’s wear design at Calvin Klein, recalled his best nights there.

“There are so many, my God, so many. The Gaga and LaBelle night. Patti LaBelle sang, and then Lady Gaga joined her and they sang together. Oh my God, did they sing ‘Lady Marmalade’? I think they did. It was the night of the CFDAs” in 2011, he said, as a New Orleans-style jazz band entered the redesigned rooftop, now being billed as The Boom Boom Roof.

“It was never meant to be the place where 20- and 21-year-olds would go to try to pick up rock stars and movie stars; this is a place where rock stars and movie stars came thinking that they would be protected from that kind of sh-t,” he explained. He went on for a while, offering up effusive praise for The Standard’s owner and mastermind, André Balazs, as the band played “When the Saints Go Marching In.”

Earlier in the evening, Balazs had been downstairs greeting guests. The hotelier wore a windowpane check blazer with solid black peak lapels and a permanent grin. He had the air of an oddly benevolent Bond villain. Surely it must have taken some Goldfinger-level scheming to stay on top for this long.

“Listen, I don’t know,” he said. “I just took my youngest daughter to college on Friday. I kept thinking about changing things, like a child keeps growing.…Hopefully [the club] evolves in the way that a human evolves. I don’t know. We pay a lot of attention to it. It’s like with a child, you just hope.”