The Tribeca Set Makes Some Early Picks at Chanel Dinner 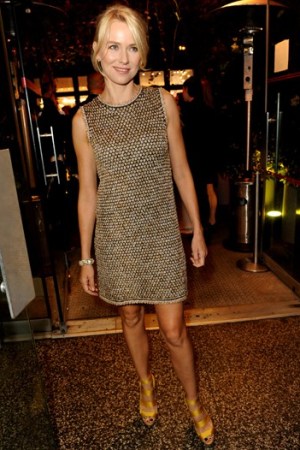 On Monday night at Chanel’s annual dinner for the Tribeca Film Festival’s artist program at Odeon, it seemed that the appeal of real life has been beating out narrative filmmaking this year.

“We’ve been on a documentary kick,” Zach Braff said while standing alongside girlfriend Taylor Bagley. Five nights into the festival the pair had seen “The Swell Season” as well as “The Donor,” which, Braff explained, “is about a sperm donor and the fifty kids who tracked him down.” The room was filled with a mix of film types and New York party regulars. Festival ringmaster Robert DeNiro greeted Adrien Brody with a kiss on the cheek and later chatted up Naomi Watts. Julian Schnabel and Patti Smith welcomed Michael Stipe. Rose Byrne, Zoe Kravitz and Lauren Hutton made the rounds in between posing for photographers.

Chloë Sevigny had just gotten back from a monthlong trip to China and said her first Tribeca-related viewing this year would be fact not fiction.

“I’m going to go on Thursday, I think,” the actress said. “My friend Mike Rappaport made a documentary about A Tribe Called Quest. When I was a young person he let me live in his apartment for free when I was broke so I’m going to go out and I’m going to support him.” Even Jason Sudeikis, a juror in the narrative category, had been doing some extracurricular work outside the field. The “Saturday Night Live” actor explained that, in addition to the half dozen films his duties required of him, he’d also taken in a documentary about the Kings of Leon and “Catching Hell.” The latter is an ESPN-backed film about Steve Bartman and Bill Buckner that examines how viciously sports fans can scapegoat players (and their own) for infamous flubs. It seemed appropriate to ask if Sudeikis had ever erred so egregiously on live TV.

“I haven’t had any Buckner moments yet luckily,” he said. “I hope to not have. Like I accidentally say the c-word on live television? Cause the f-word’s been done a few times. I got to step it up if I was going to do it. Oh that’d be horrible. It’d be awful. I shouldn’t even talk about this. Forget we talked about this. Erase this.”