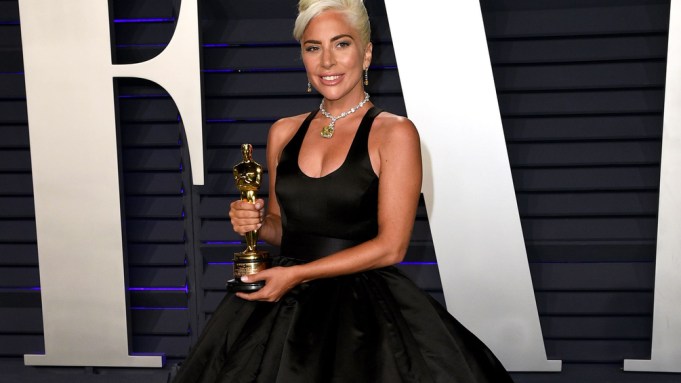 Inside, Serena Williams was discussing business with an executive when she spotted the “Black Panther” cast to the side. Safe to say the business chat was no more: Williams made her way over, hugging Chadwick Boseman, Michael B. Jordan, Danai Gurira and Lupita Nyong’o (a no-show on the Oscars carpet who made sure her Oscar de la Renta dress got its moment in the spotlight on the VF carpet). The group began to bob their heads and chat over Cardi B’s “I Like It,” before Tiffany Haddish swooped in to borrow Gurira for a novice salsa dance.

Already inside, Freida Pinto yelled ‘Aww,” in excitement as the first few notes of Justin Bieber’s “Sorry” revealed itself to the crowd.

“It’s a night of reunion,” Angela Sarafyan was heard saying with a smile before she fell into conversation with Joe Jonas, who was waiting for his fiancée Sophie Turner to get drinks from the bar.

The newlyweds Nick Jonas and Priyanka Chopra were a few feet away. As Chopra attempted to adjust her updo, her husband served as a smiling mirror, reassuring her that all was well before the pair joined the others.

As guests noticed Lady Gaga, who won Best Original Song, they began to scream her name. Enjoying a cigarette, the multihyphenate welcomed their doting compliments and kisses with a smile.

Unmoved by all of the fuss was Sarah Hyland, who was deep in conversation with Sarafyan. Before the “Westworld” star took off, Hyland screamed to her friend draped in diamonds, “I love you, have fun in Chopard.’

Nearby, one could hear Tessa Thompson discussing the ceremony: “It went really well without a host. It moved nicely.”

As the night drew to a close, the Mulleavy sisters were outside awaiting their cars. “We heard Dick Van Dyke was here,” Laura was overhead saying. “We searched for him for an hour and a half. We didn’t have any luck, but we did find Joni Mitchell.”