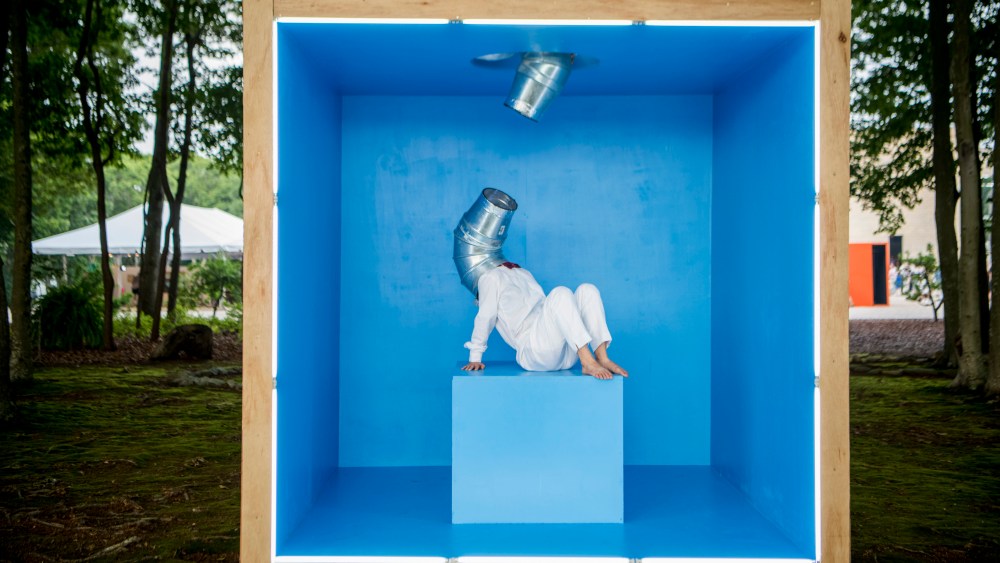 “I remember coming here when Bob first looked at the property, and it was a Western Union Telegraph place. It was a cinder block building with nothing in it,” said Peggy Siegal on Saturday night, the rhythmic ping of exploding paintballs sounding beside her. An armored man was stationed inside a glass cube in the courtyard firing off rainbow-colored pellets, an amuse-bouche for the performance art that laid ahead in the woods.

The Watermill Center’s annual summer benefit certainly contributes a heavy dose of color to the Hamptons summertime social calendar, and is one of the more cherished events of the season — even more so this year, as it marks the avant-garde organization’s 25th anniversary. To mark the milestone, founder Bob — that would be Robert Wilson — chose to posthumously honor his friend and longtime supporter, Pierre Bergé.

“He was the first major supporter, and without his support I would have probably not had Watermill,” Wilson said as daylight began to wane. “And he was a big supporter of my work for many years, and a dear friend. He was a great humanitarian; there were so many facets to his persona: a writer and interest in fashion and politics and literature and classical art and classical painting, music and opera and dance. He was a world cultural minister.”

Nearby, Jamee Gregory was keeping an eye on Wilson’s “date” for the evening: “My granddaughter Carolina, who’s eight, this is the third time she’s come here, and this is her favorite night of the summer,” Gregory said. “She has a correspondence with Bob and she wrote him a letter and he answered her, and they send pictures back and forth,” she added. “She said he’s her date tonight.”

During cocktail hour, a marriage of various artistic approaches was on full display. Dancers wearing formalwear and VR headsets folded their bodies together atop a platform at the entrance to the property’s woods, where another duo sat inside a blue box with silver tubing obscuring their heads, attempting to blow and exchange giant bubbles. Further in the woods, two legs jutted out from atop a Truffula tree-esque sculpture.

“I have a sculpture here for the first time; I’ve donated a work that is still up — it’s the tires on the flagpost,” said Montauk resident Lucien Smith, donning a hot-orange camo bucket hat. The art wunderkind was making the rounds with his friend and forthcoming artist collaborator Lucca M., in town from Los Angeles for the summer. The West Coaster had underestimated the allure of summertime on the Easr Coast.

“We’ve been fishing and golfing, and we’re, like, ‘this is what people work their whole lives to do, and we’re kind of like old men right now.’ But it’s pretty swag.”

Speaking of swag, a few guests didn’t walk away from the evening empty-handed. During the dinner’s live auction, another dinner with — or by, details were very nebulous — Marina Abramović was up for bids.

“It’s not exactly a normal dinner,” Abramović admitted. “Very simple rules: if you want a dinner with me, it will be different, strange, exciting and exhausting. And you’ll definitely have an unforgettable experience. This is as much as I can say. Including dirty, politically incorrect jokes.” After a few bids, she said a little more: no technology, and guests have to wear noise-canceling headphones while eating. Oh, and also — “Before you have the dinner with me, you have to prepare yourself: three days before, you can’t have sex, you can’t watch television and you can’t talk about Trump.”

“I’m out!” exclaimed one potential bidder (who was later very much “in,” placing winning bids for works by Roy Lichtenstein and Andy Warhol).

Still, there was plenty of art for free. Wilson took the stage to honor Bergé with a spoken-word performance speech and then introduced Madison Cox, the late Bergé’s husband.

“On Pierre’s behalf, I’d prefer to read something he wrote a few years ago,” said Cox, going on to quote the late fashion titan: “’We all know that since the Second World War, no other stage production has revolutionized the theater world more than ‘Deafman Glance.’ That day, Robert Wilson’s genius burst upon us, and it’s never ceased to manifest itself. But Wilson is not only a stage director: he’s an artist, a master of lighting, a decorator, a furniture designer, and an educator who teaches his Watermill Center the magic and the mystery of theater.’”

Cox looked up from his sheet of paper and concluded with his own words: “To take a true Wilsonism, one plus one equals one, and the two of you were one.”