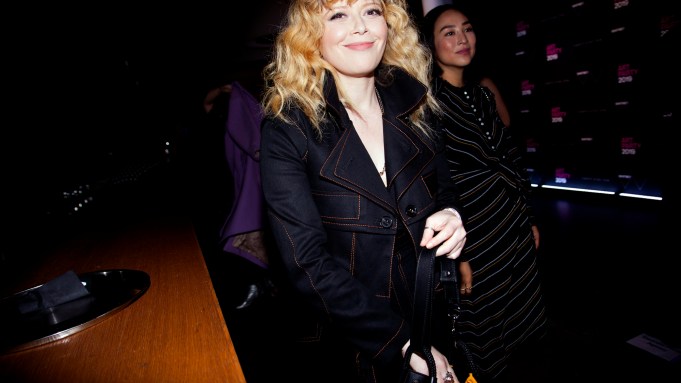 The 2019 Whitney Museum Art Party, held Tuesday night, began as a civilized affair on the third floor of the museum; with a view of the Hudson River and twinkling lights of the city in the distance, Natasha Lyonne, Jack McCollough, Lazaro Hernandez, Wes Gordon, Adam Lippes and more listened to live jazz while they dined.

The calm didn’t last long. “Are you staying for the party afterward?” one attendee asked. “Apparently it gets kind of crazy.”

An elevator ride down to the ground floor proved this sentiment correct. While Greta Lee, Young Paris and Kristen Cole — the president and chief creative officer of Forty Five Ten, which partnered with the Whitney to sponsor the evening — finished dessert upstairs, DJ Kittens flooded the rager on one with tunes from Migos, Cardi B and City Girls. Models, towering on wobbly heels, took pictures at the arrivals section. Large groups of young Millennials beckoned more friends into the neon-lit photo booth for selfies. Looks ran the gamut from full, red-carpet glam to cocktail to arty normcore.

Cole, though, was on another wavelength. She said she’d just come off of a six-day “bender” traveling between Dallas and New York, finalizing details and deals for the new Forty Five Ten store, which will open at Hudson Yards in mid-March. The new shop was one reason her brand got involved with the Whitney at this particular time. But most of all, she said she was looking forward to relaxing and seeing the band Onyx Collective perform.

It was Lyonne and Lee’s big night out. The two were celebrating the acclaim for their new Netflix show “Russian Doll,” after seeing a particularly shining review from Rolling Stone earlier that day.

“It’s very moving and it’s life-affirming,” Lyonne said. “If that’s what you do — you live in the arts, you take your experiences — which are often horrors — and then you put them out there and you try to make them a little bit funnier and more palatable, and people respond kindly and really seem to get it. It’s a deep, nice thing.”

“I’m relieved that people are taking to it, because there were going to be a lot of knuckle sandwiches I was going to have to give out,” Lee added.

“We did have a plan B strategy, Greta and I discussed, which was similar — I’m not sure if you’re familiar with the film ‘Goodfellas’ — we did have a ‘Goodfellas’ response plan as a cast, as a creative team,” Lyonne stated.

“Just in case people didn’t respond kindly, we were going to go to their houses.”

“And you have to find all of them.”

Singer, performer and Internet mystery Poppy also came to the party, dressed in a Harajuku-esque dress that she said she’d named “painted beauties.” She’s on her “Am I a Girl?” tour, and is looking forward to wearing particularly elaborate costumes for the New York leg.

“There will be lots of feathers, ruffles and shiny things,” she explained.

HQ Trivia host Scott Rogowsky, in his signature blue suit, took pictures with fans. He said his connection to the Whitney is twofold: he had an ex-girlfriend who worked as an intern when the museum was still on the Upper East Side, and Whitney director Adam Weinberg goes to the same synagogue he does.

“I see him on high holy days,” he said, then eyed a waiter holding a tray of what looked like miniature ice cream cones. “Ooh, is this cookie dough?” Rogowsky exclaimed. “Yes! I’m going to take two.”

WWD Report Card: The Saga of the Fashion Harness