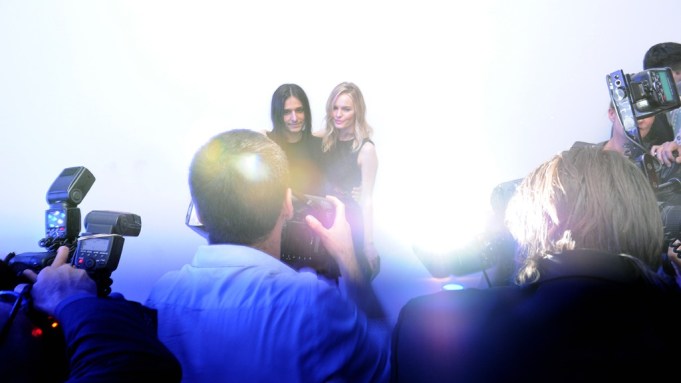 “It’s a party,” honorary cochair Olivier Theyskens laughed on Wednesday night at the Whitney Museum’s Annual Art party. “I just want everyone to have fun, and raise money for the good cause.”

Kate Bosworth smiled serenely on the designer’s arm, and the pair were quickly enveloped by camera flashes. The crush of people inside Skylight Soho in Manhattan’s SoHo neighborhood implied that said aim of raising funds for the museum was a success, but also made navigating the Theory- and Saks Fifth Avenue-sponsored fete near impossible. “Where is the auction?” one elderly partygoer shouted over the musical stylings of DJ Japanster, whose decibel level made the music an almost physical presence in the space. The older patron looked helplessly around the bar area, which was cast in alternating shades of purples and reds by overhead gels. “And who is Gallop Lindsay?” the man added.

Kalup Linzy was one of the evening’s performers along with Iona Rozeal Brown. Linzy’s piece was entitled “A Memorial for Taiwan,” in which he laid to rest his dramatic, blues-y diva alter-ego. There were flowers and a casket.

Hannah Bronfman was on hand in a vintage metallic dress with tiered skirt.

“I honestly don’t know when or where I got it,” Bronfman laughed, behind her a framed work by Shelter Serra appeared to be a melting wax Birkin bag. Lauren Santo Domingo, Thakoon Panichgul, Yigal Azrouël and Laura Vidrequin all filtered through the cavernous space, angling glances at the art over the crowded shoulders of attendees.

Emily Weiss, fresh off a flight from Berlin, was sylphlike in barely there Theyskens’ Theory.

“I’ve got a sort of Beyoncé at the Met Ball almost-entirely visible bottom half thing going,” Weiss laughed of her dégradé sequin shift. Wes Gordon chatted with Misha Nonoo, his fellow recipient of the Fashion Group International rising star award in women’s wear in January. Nonoo had just returned from her recent nuptials in Venice, where she married Paddle8 cofounder and previous Phillips de Pury auctioneer Alexander Gilkes.

“All my friends keep posting photos on Facebook, it’s kind of mortifying….” Nonoo said, “There’s so many! Though it was a three-day affair, so I suppose there was a lot of material to go with.”