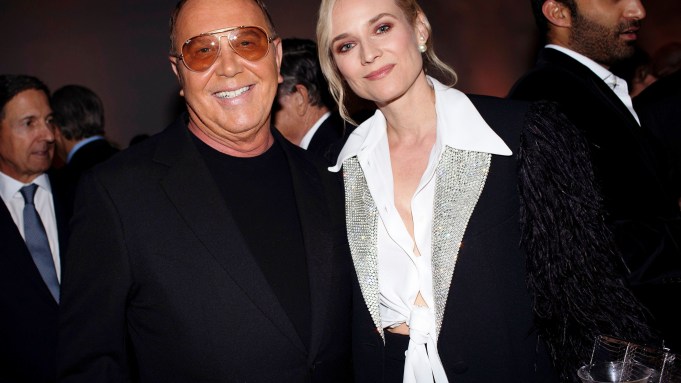 American fashion, art and business melded Tuesday night at the Whitney Museum’s annual gala and Studio Party, which this year honored Michael Bloomberg and was presented by Michael Kors and Audi.

“Well, of course, I’m an American designer, and here we are in a museum that really pays homage to great American talent,” Kors said during cocktail hour on the museum’s fifth floor. “And I think they’re always thinking outside the box. I think they always look at things with a different lens. And being a downtown boy — my house is around the corner — to bring this level of an institution to a residential neighborhood is a remarkable thing.”

“Michael, you look great,” Mason told Kors as he passed by.

“YOU look great,” Kors countered (Mason was, after all, wearing the designer’s clothes).

“He’s going to teach me how to dance,” Kors said after the model had left. “He’s so good.”

Kors, who called honoring Bloomberg the “cherry on the cherry on the cake” of the evening, has known the former mayor since he was first in office.

“You’re talking about someone who is just a force of nature in everything he touches,” Kors said. “I think what he’s given to the city and given to the world at large is remarkable.”

Once the Whitney’s big night was over, Kors planned to go back into full Met Gala preparation.

“I’ll be honest with you, because we make everything in Italy — we just got back from Milan, where we were checking on everyone’s Met outfits. And now they’re feverishly finishing everything up, and then it’ll be the insane madness of fittings at the last minute,” he said of the lead-up to the May 6 event. “We’re happy about [the theme of “Camp”]. I think people are really going to have fun with it.”

Bloomberg received a grand total of three standing ovations as he greeted the gala audience for his recognition, which clearly tickled the businessman.

“I don’t think so many artists have ever said such nice things about someone with so little artistic talent,” he joked upon making it to the stage.

“I moved from Boston to New York back in 1966, the same year that the Whitney moved from Midtown to the Upper East Side,” he said in his remarks. “And if you had said back then that the Whitney’s next move would be to the Meatpacking District, everyone would’ve laughed.”

As the upstairs crowd moved on from fish to dessert, the lobby of the museum slowly filled with downtown scenesters and young art friends for the Studio Party; they mostly stood around sizing each other up as the DJ pummeled Drake into the air.

Kelela was there roaming the party with friends, Ellie Goulding and her art world fiancé Caspar Jopling dropped by, John Targon chatted away while modeling a look from his new line Fall Risk, and the likes of Alexandra Richards, Soo Joo Park, Aurora James, Mia Moretti and more made the rounds. The sight of the museum’s giant elevators depositing the gala crowd into the middle of the party made for some fascinating people watching. Mr. Bloomberg, it turns out, can make quite the speedy party exit.