The Whitney Parties at Its Future Home

The museum honored Google exec Marissa Mayer at the site of its new Meatpacking digs on Thursday night. 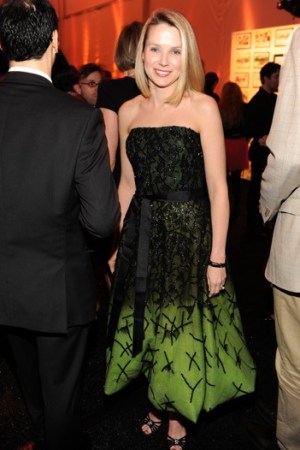 At the Whitney’s Annual American Art Award on Thursday night, Google executive Marissa Mayer gave a quick master class on the variations of the company’s logo it often deploys on its home page.

“We call them doodles,” she said of the designs. “I have about ten favorites…I loved PacMan, I loved the John Lennon doodle. I loved when we had the San Francisco ballet dance to Tchaikovsky, I loved the first time we celebrated an artist, which was Monet, on his birthday, November 14. I loved all the artist doodles that came after that. I also love that we’ve done so many different guest artists with the logo. We’ve had Jeff Koons. We’ve had Wayne Thiebaud. Last week we had a guy named Ryan Woodward, who’s an amazing animator, animate a Martha Graham logo. It was just spectacular.”

Mayer was being honored at the dinner, and one portion of the tent had been decorated by works from the company’s annual Doodle 4 Google competition that allows for entries from school children. (Congratulations, 7-year-old Matteo Lopez of San Francisco.)

In addition to the annual award, the event, held on the future Gansevoort Street site of the museum’s new building, also celebrated groundbreaking on the project. A mix of art, media and social figures turned out for evening, including Christo, Vito and Jacqueline Schnabel, Tara Rockefeller, Allison Sarofim and Yvonne Force Villareal.

“I love it. I absolutely adore it,” the hotelier said of the addition to the district. “I think it will change it; it will transform it. I think a major cultural institution down here just adds a sense of gravitas to the whole neighborhood. It’s always been exciting. It’s always been cutting edge. And it adds a level of sophistication that we’ve always felt coming.”

“I look forward to the completion of this facility,” he said.