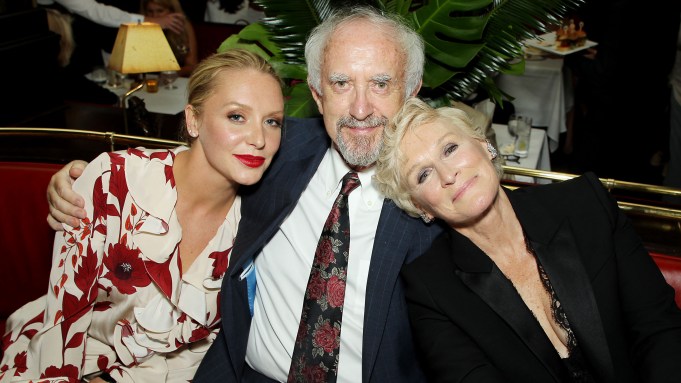 “I’m an optimist, I really am,” Annie Starke said on Thursday night from the Paley Center in New York. “Now that the dialogue is out, now that the #MeToo movement has legs beneath, I am an optimist — I think we’re not going to go back. We shouldn’t go back.”

The actress was at a screening for her film “The Wife,” in which she stars as the younger version of the main character Joan Castleman — played by her mother, Glenn Close.

“The #MeToo movement hadn’t started,” said Close, reflecting on the time between the film’s premiere during the Toronto International Film Festival last year and its theatrical release this summer, pushed back from its slated release late last year. “Actually, I was worried because I thought there were rumblings and there were things that were happening and I thought that we’d lose the press to the wave if we waited a year, but Sony was absolutely correct, and I think it couldn’t be opening in a more opportune time. I mean it’s incredible — [the book] was written 14 years ago.”

The film is based on Meg Wolitzer’s 2003 novel, and is female-centric in many ways. “Female costumer, female editor, many of the producers are women. I think this represents where we want to be,” Glenn added in addition to the film’s screenwriter, Jane Anderson.

“Interestingly, the screening in L.A., the premiere there, there were laughs at things I was saying by women — just women laughing — and it was a laughter of recognition like, ‘oh yeah, there he goes, coming out with that line,'” said Jonathan Pryce, the husband to Close’s wife in the film. “[The film] does have a female sensibility, if there is such a thing.” Pretty soon, Pryce will star as Pope Francis for Netflix in, well, “The Pope,” coproduced by Tracey Seaward. “One of the best producers I’ve ever worked with,” Pryce added. “Women have always been there, let’s not forget that.”

“They had such great chemistry and it feels like they’ve been married forever,” said Christian Slater of his costars, after finagling his way past the cluster of fans stationed outside the theater. “There were so many real, honest things that were happening in that relationship that when people watch the movie, they look up and then they start seeing themselves in this situation. And then they start asking themselves questions about their own relationships — these compromises that they may have made, these choices you make early on in a relationship, all these sacrifices, then all of a sudden 40 years have gone by and you look back and go, ‘Wow.'”

As for the women who have bolstered him throughout the year, Slater gave shout-outs to his publicist and, naturally, his wife. “I couldn’t be anymore blessed or lucky. I’m just bummed she’s not here,” he said. “If I could put anybody up on a pedestal — she wouldn’t like that — but that would be the one that’s the most loving, wonderful supporter I could have.”