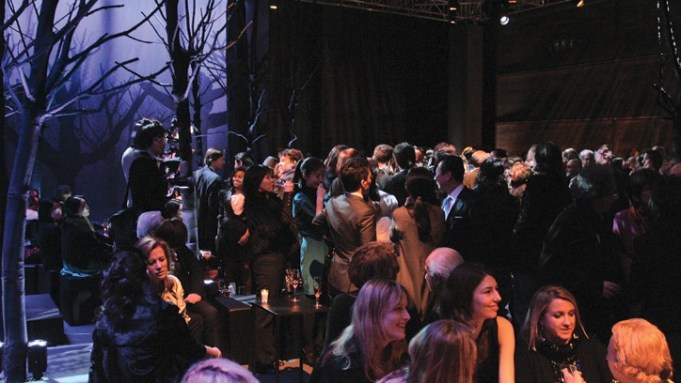 Whooping it up is back in style in Paris.

Faced with dreary financial prospects, a general ennui in today’s rule-bound society and a lackluster nightlife, a new wave of entrepreneurs is out to sharpen Paris’ after-dark act by opening a number of swank clubs across the city.

Offering premium liquors, dapper decor and live music, many of the venues’ anachronistic, speakeasy-style interiors are a nod to the good old-fashioned entertainment that was popular in the days before disco.

“They used to bring elephants into nightclubs. Politics has put an end to everything,” complains events producer, 25-year-old Adrien Maselli, who, along with his twin, Anthony, and older brother, Julien, 30, manage the club Chez Tania, staging wild masked balls, theme parties and a string of hot happenings, such as Amy Winehouse’s gig for Fendi’s after party in March, and a private bash for gallerist Thaddaeus Ropac.

“[Their parties] are totally different, exotic, fun and intimate, but also strange and eclectic,” comments designer Alexis Mabille. “Everyone is fed up with being sad and trashy….The Paris party scene is coming back.”

Since August, the dashing brothers (the twins modeled in John Galliano’s wacky people-of-all-shapes-and-sizes catwalk show in October 2005) have focused their efforts on Good Night Production, an events company that creates slick club nights for corporate companies and fashion houses. Most recently, they were behind Fendi’s Paris Fashion Week party in October for Dita Von Teese’s birthday at the Le Milliardaire club attended by Kylie Minogue and Sofia Coppola, with London “It” girls Pixie Geldof, Daisy Lowe and Alice Dellal manning the decks.

Adrien Maselli believes a growing sense of frustration among the city’s thirtysomethings has inspired a revival for glamorous abandonment reminiscent of the Roaring Twenties.

“Today you’re not allowed to drink and drive or make noise late at night. Smoking indoors is prohibited, AIDS put an end to free sex. We’re afraid of everything,” he says. “We’re out to prove that, despite all of the city’s red tape, we can do it. We can still put on
a damn good night.”

The brothers also are fueling a renewed zeal for dressing up to go out, channeling a partcabaret, part–Rat Pack vibe. “Certain nights we’ll do the Prohibition-era look and wear beautiful shirts and tailcoats, our hair slicked back with gel, but mainly we like to wear Dior Homme suits mixed with a pinch of Galliano for modernity,” Maselli says.

The Chacha Club, the latest initiative of 30-year-old Julien Labrousse, has been crammed nightly with the city’s young and beautiful since its fall opening. The owner of the hip canal-side eatery Hôtel du Nord, fuses Thirties decor with contemporary art installations, and the club has already hosted parties for the likes of Chanel, Jean-Charles de Castelbajac and Dazed & Confused Japan. Inside, the space is filled with taxidermia and battered chaise lounges, boasts an interior smoking room and encourages guest to jam out in the upstairs music room stocked with electric instruments.

Having funded his Hôtel du Nord venture four years ago with collateral from a software company that he operates in Asia, Labrousse invested 6 million euros, or almost $8 million in the club.

His plan is to eventually open an even more ambitious venue, with more music rooms, a piano stage and a more “cinemograhic” design approach. The consensus of this new generation of club managers is that Paris’ standards have slipped.

“Our generation has lowered its values. Youngsters just tend to go out to get stoned or hammered—they’ve forgotten the classy way of going out for a drink. We’re trying to encourage people to make an effort,” says Experimental Cocktail Club’s Romee De Goriainoff, who, together with Pierre-Charles Cros and Olivier Bon, all 26 years old, is looking to upgrade the city’s bar scene. Having squirreled away money for their project since their teens, the dynamic trio took out a bank loan to finance their first bar, the Experimental Cocktail Club, two years ago, before going on to self-finance their second site, Curio Parlor, an upscale bar situated in the city’s Fifth arrondissement.

“Paris has been dead for 10 years. It’s lost its footing as the country with the best taste, so we thought we’d go for it and base the whole concept on good taste,” says De Goriainoff, referring to notorious nightspot Le Baron, that was taken over by André around five years ago. “It’s easy to buy a lap-dancing club and then invite cool people, but there’s no reflection in that.”

For Curio Parlor, the idea was “to go a step higher, to serve artisanal cocktails in frozen glasses and offer a more diverse whisky menu,” says De Goriainoff, adding that, with the bar’s anonymous black facade, the owners favor the self-selection process over having a door policy. Inspired by the bar scene in New York and London, their main mission, De Goriainoff states, is to offer premium service in a city known for its rude waiters. “New York has a way of bartending that doesn’t exist in France and that greatly inspires us. Complex cocktails need to be presented to the customer in the right way; it’s an art,” he says, adding wryly: “One of our motives is that drink is not good for your health, so why not at least get drunk properly.”