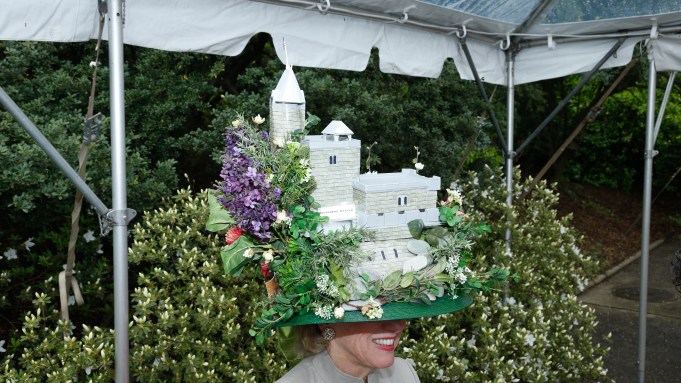 It may have been barely 50 degrees on Wednesday afternoon, but you never would’ve known it from the looks filling the Central Park Conservancy garden. The sidewalk along Fifth Avenue and 105th Street was a telling sign that the Women’s Committee of the Conservancy was hosting its annual luncheon, officially the Frederick Law Olmsted Awards Luncheon but better known as “the hat lunch.”

Women in every shade of pink under the sun and wearing hats to match (or deliberately unmatched, as was often the case) strode in for an afternoon of mingling, fundraising and fascinator talk.

Michael Bloomberg, a rare male in the sea of uptown ladies, joined Martha Stewart, Marigay McKee, Fe Fendi and more inside the tent, where pink tablecloths, cherry blossom centerpieces and glasses of rosé all but masked the otherwise grey day.

“I was all set to wear flowers, and then I said ‘No, I love this hat,’” said Jean Shafiroff, in a black-and-white checkered hat. “And then I went to my closet and I found this jacket; it’s from a few years ago, Michael Kors. And I thought it really worked. Really, I was going to wear my green Dolce, very simple. I see a trend in fashion moving forward for more solids. I think we’re going to move away from prints, don’t you think?”

Over on the staircase, guests recapped their winter getaways. “How was Palm Beach this year?” a feather-topped woman asked a friend descending the stairs on the arm of a handsome young fellow. “Oh, you know, it was pretty good,” was the reply.

Heading to the trumpets encouraging guests to move inside the tent, the hat discussion only continued.

“I wanna get a photo with him, I’m stalking him,” said a turquoise-topped woman in hot pursuit of an exotically dressed man, who today donned a Wes Anderson-esque printed suit and equally enthralling hat.

Over a lunch of burrata and baked chicken, speeches were made (surely of importance), but were impossible to hear over the discussion of the colorful ensembles everyone was wearing. As one guest said, “Who says New Yorkers only wear black?”