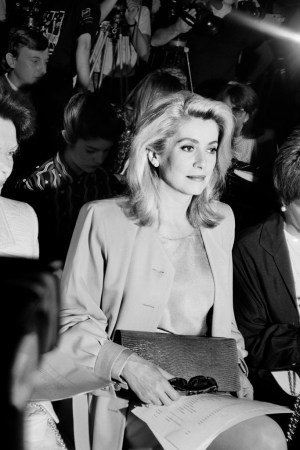 The photographer Roxanne Lowit was at a café in Los Angeles recently, reminiscing about Yves Saint Laurent.

“He had an aura that nobody would pierce,” she recalled. In the course of 24 years of taking his portrait and shooting his shows, Lowit got as close to the mercurial couturier as anyone could, outside of his immediate social circle. The petite New Yorker with the immaculate bob and all-black wardrobe would call him by his first name while everyone else addressed him as Monsieur Saint Laurent. She even managed to capture him smiling on several different occasions. He was either in his atelier — in his white lab coat, of course — or at a soiree surrounded by the kind of colorful women he preferred, models, Diana Vreeland and Nan Kempner. “He felt comfortable around me,” Lowit said.

Hundreds of her pictures are now collected in a new book, “Yves Saint Laurent” (Thames & Hudson), set to hit stores in November, just the latest in a spate of projects channeling the legacy of the late designer. In theaters now are two biopics, “Yves Saint Laurent,” directed by Jalil Lespert with the approval of the designer’s estate, and a more impressionistic and provocative profile from Bertrand Brunello, “Saint Laurent,” that took its American bow last week at the New York Film Festival.

While this collection of photos, dating from 1978 to Saint Laurent’s finale in 2002, is Lowit’s fourth book, it’s been in the works since the day she first encountered the designer, at the top of the Eiffel Tower.

“Ever since I first met him, I wanted to do something on him because I so admired him. He did everything first, and he changed the way women dressed,” she said.

In contrast to other portrayals of his life, she described hers as intimate. “It’s like you’re walking through backstage with me,” she said. “And it’s very personal, it’s close-up, it’s private. I asked some of his muses to write for the book, and some of his models wrote for the book.”

Grace Jones remembered how Saint Laurent, in the middle of a performance, created an impromptu ensemble for her with his tuxedo cummerbund as a bandeau and Loulou de la Falaise’s scarf as a skirt. “Très chic and a total hoot” was Jerry Hall’s summary of her transition from Texas to couture to becoming the Opium girl. Pat Cleveland, Paloma Picasso, Betty Catroux, Lucie de la Falaise and Catherine Deneuve opened up about their bond with the designer. In one picture, a teenage Kate Moss reenacted the haute couture version of Vermeer’s “Girl With a Pearl Earring” painting, while in another, Saint Laurent and Karl Lagerfeld — still friendly at that point — locked arms around each other at Le Palace nightclub.

“It was before [fashion] was the big business it is today,” Lowit said. “At the time, I didn’t realize how lucky I was to be together with them, because people were approachable then. They didn’t have entourages and publicists and agents and so on.”

In the foreword, Pierre Bergé, the designer’s partner, described the time Lowit popped out of nowhere on a New York street, handed Saint Laurent a cardboard cutout of the Empire State Building and captured him kissing it moments before he boarded the Concorde back to Paris.

“Roxanne is always there, even when she is not expected,” Bergé writes. “Her sharp eye has been able to capture the most secret situations, the most hidden of mysteries.”

Approaching her fourth decade as a fashion photographer, Lowit, who says she really started out as “a textile designer with a camera,” has no plans to stop. She navigates social media with the help of her daughter and an assistant and counts younger photographers as friends and collectors. And she went to Paris to document the spring fashion shows, personally delivering one of the first books to Bergé.

“After all,” she said, “when there’s a lot going on that’s interesting, like there was at Saint Laurent, then I was perfectly happy just zoning out and taking pictures and being in my fashion heaven.”