They Bought a Zoo: Mulberry Parties at Chateau Marmont 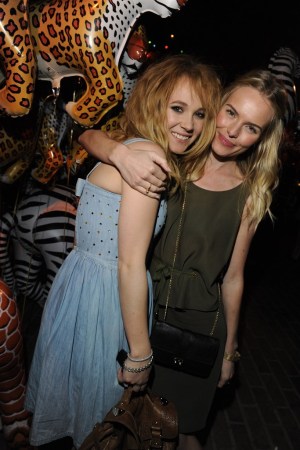 Mulberry got props, literally, for bringing the circus to Hollywood on Thursday night for its biannual Chateau Marmont dinner and dance party. A jungle of blow-up lions, tigers, panthers and zebras (and the odd ice cream cone) greeted guests around the swimming pool and brick patio where the dinner took place, prompting Cat Deeley to say, “Fierce. I want to take these home. Do you think I can pull up my car and start loading them in?”

Nobody, as it turns, got to loot the set display, as the life-size balloons were later donated to a children’s hospital. Guests did leave with Mulberry goodie bags. Once Kate Bosworth, Gia Coppola, Alice Eve, Juno Temple and company settled in at the long table for a family-style dinner, singer Lana Del Rey took to the stage, performing a sultry set.

“I think I have a girl crush,” said Temple as the auburn-haired bombshell clutched the mic with her pointed red talons, channeling a young Ann-Margret in her chiffon Mulberry gown.

“We’re big fans, we’ve been following her for a while,” said Bosworth.

Several broken dishes and glasses later (one of the pitfalls of a poolside party with real china) the crowd, including Del Rey, headed inside to Bungalow One for dancing until the wee hours.