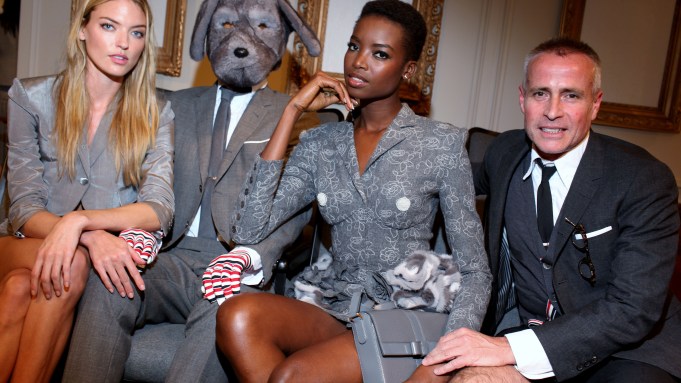 “I have to tell a story that probably hasn’t been told yet,” Daniella Vitale told the intimate dinner crowd, clustered in the fourth floor penthouse at Barneys New York on Wednesday night to celebrate the retailer’s partnership with Thom Browne. “I actually hired Thom a long time ago when I was working for Gucci, to head up men’s,” she continued. “I was so excited — we’d looked for a really long time and thought, ‘Oh, my God, I have found this perfect person — incredible taste, handsome, smart. He was going to be great.”

You can see where this is going.

“He calls me two days before he’s about to start and says, ‘I can’t do it. I’m going to start my own line.’ I’m like, you’re going to start your own line? What are you talking about? What could be better than Gucci men’s? Thom, you really broke my heart that day.”

Decades later, hearts have mended a couple times over. And the designer may be showing in Paris, but thanks to the Barneys initiative he’s still very much a part of this New York Fashion Week. To kick off the week and the experiential initiative, many of Browne’s friends and collaborators showed up (in his designs, of course) to toast the designer. Before dinner (during which the Barneys Thom Browne burger was served), the dog-headed mannequin sitting in a mini-theater installation proved to be a popular guest; at one point, he was sandwiched between Martha Hunt and Maria Borges, and Browne was happy to capture the moment for Hunt on her point-and-shoot digital camera.

Even the Barneys windows, packed with white blinds, are a Thom Browne installation. “Everyone’s like, ‘When are they going to open’? I’m like, ‘They’re not,'” said Browne of the windows. Apart from Barneys, the designer plans to show his support for a few of his friends during NYFW.

“My best friend Johnson [Hartig] designs Libertine, so I’m definitely going to see that next Monday. And then, of course, I’m going to celebrate Ralph on Friday,” said Browne. “Fifty years, I mean, you gotta celebrate that. It’s amazing. He’s an icon.”

Nearby, Nathan Stewart-Jarrett was catching up with fellow actor Lee Pace; Thom had suited the “Angels in America” actor for the Tonys this past June. “I was like, I love these trousers so much — I wore them the following night. Just at a friend’s house,” said Stewart-Jarrett of his look for the awards ceremony. It’s his first New York Fashion Week experience, and Sies Marjan is also on his docket. Oh, and tennis. “[Novak] Djokovic is playing tonight, so I’m going to go home at some point and catch up on tennis. I’m a huge tennis fan,” he added. (For the record, Djokovic won the match.)

The New York Fashion Week schedule also aligned for Danai Gurira, a cohost for the evening’s event. “I don’t always get to be in town during fashion week, so it’s kind of astounding to have been able to celebrate the astounding work of Thom Browne, the originality of the whole essence of his work that I’ve always gravitated toward,” she said. “And I’ve worn so many of his pieces. So, to get to actually spend time with him and celebrate him is really epic and really exciting.”

It’s been quite the week for Browne, what with the company’s recent acquisition by Ermenegildo Zegna Group. In Sang Woo Kim’s eyes, the Barneys celebration encompassed all of it. “I know he’s going to keep his ethics and his creative license… I feel like it’s only going to be positive,” said Kim of the business news. “Thom Browne has treated me like family. I’ve worked with him more creatively — the majority of people in the industry know me as a model, but these guys have always looked out for my artistic capabilities.”

During dinner, Browne informed the room there was another reason to celebrate that evening, and that reason was Andrew Bolton’s birthday.

“I do want to say, it’s so nice of you to throw this birthday dinner for Andrew,” said Browne.