The red, white and black actually served as a reminder of last week's election, but as Browne clarified, that was unintentional. 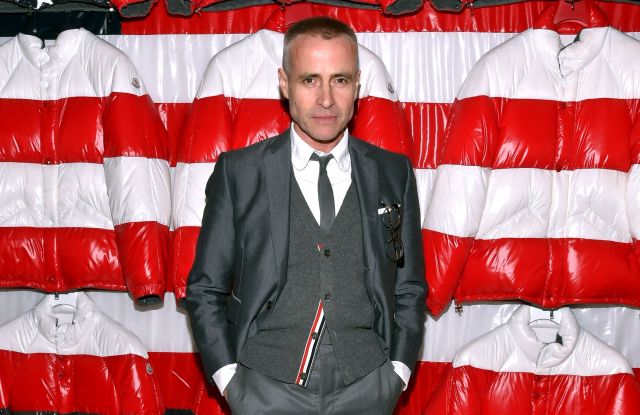 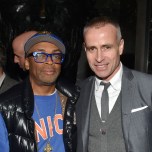 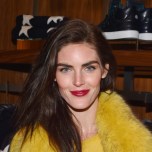 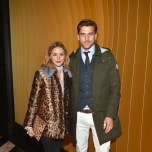 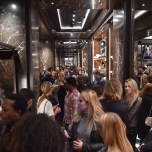 Moncler celebrated the opening of its Madison Avenue boutique on Wednesday night by inviting guests to enjoy cocktails among its winter jackets and fur-lined shoes. The new space — and the brand’s first U.S. flagship — encourages luxury shopping via extravagant features like a kinetic light sculpture, black and white chevron marble and a classically inspired sculpture of a head, aptly titled “Tête Moncler.”

Valentino, Olivia Palermo, Damaris Lewis and other guests mingled among the Moncler offerings, taking breaks to view an installation created by Thom Browne, as well as a short musical film directed by Spike Lee.

After posing for pictures in front of his installation — comprised of patriotic-themed jackets arranged to look like the American flag — Browne revealed the meaning behind it. “It was taking the heritage of Moncler and just celebrating their store here in America,” he said. “So it’s kind of self-explanatory where it came from.” The red, white and black actually served as a reminder of last week’s election, but as Browne clarified, that was unintentional.

“I knew that it was gonna be at this time and it was really just celebrating America,” he said. “Regardless of where people stand on what happened, it’s really just a celebration of America — and moving forward.”

Lewis was featured in Lee’s short film, which was available for viewing behind maroon curtains in the back of the store. The model wore a black Moncler Daphne jacket over a Sophie Theallet ensemble. She described working with Lee as “a dream come true.”

“I’m from Brooklyn and I think most people who are creatives from Brooklyn always wish to work with Spike Lee,” she said. “I luckily had been blessed with many people in my life, including Prince, and to have Spike Lee also added to the roster means the world to me. It was amazing. I mean, it was 95 degrees outside — probably 100 degrees. And we got through it and we did every shot.”

Lewis’ dance moves are a highlight of the short and as the model revealed, she’s been dancing since she was seven. “I actually went to LaGuardia High School for dance and I was Prince’s dancer on tour until he passed away,” she said. She also admired the versatility of Moncler’s offerings: “I think that’s one major thing about people in general nowadays — you want something you can wear to work and then something you can also wear when you go out at night without having to run home and switch. That really gives that versatility with this collection where I feel comfortable wearing it to a shoot, but also going from the shoot to dinner.”

Immediately following, Joan Smalls spotted Lewis from across the room. She squealed and the two hugged.