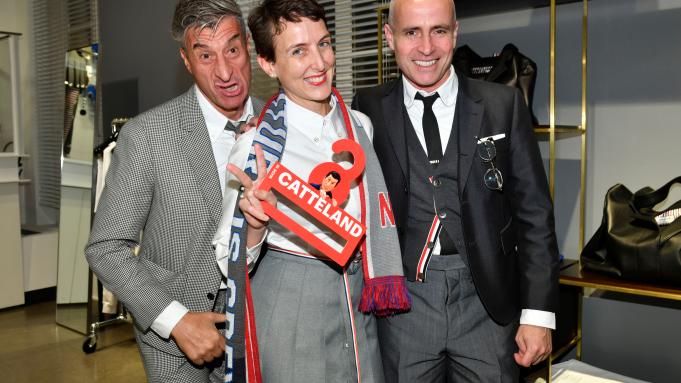 PARIS — An arty crowd descended on Colette on Wednesday evening for a cocktail and dinner celebrating the launch of a collaboration between Thom Browne, who has taken over the first floor of the Paris concept store, and Italian artist Maurizio Cattelan.

Cattelan designed a limited-edition soccer scarf emblazoned with the slogan “The Future Is Grey” as part of his Made in Catteland series of art for the masses.

“I think he’s an amazing artist,” said Browne, who sat at a desk as Cattelan pretended to take his measurements. “What I love most about Maurizio is his humor, and I love people that just are their own person — and Maurizio is definitely that.”

Browne has designed a number of exclusive pieces for the store, including a bag in Colette’s signature blue color shaped like his dachshund Hector. His relationship with Sarah Andelman, the store’s creative director and purchasing manager, goes back to the origins of his label.

“Sarah was the first person to buy my collection, so I have a very big sense of loyalty to Sarah,” Browne said. “Because of how special she is to my collection, I wanted to make sure that people saw the connection.”

Andelman was preparing to attend the ComplexCon convention and festival in Long Beach, Calif., on Nov 4 and 5.

“We are bringing Colette with five brands from Paris: Club 75, Nasaseasons, Pigalle, Andrea Crews and F.A.M.T.,” said the buyer, who is on the event’s host committee with Pharrell Williams and others. “Young people pay to get in, buy products and attend concerts, so it’s not like a traditional trade show for buyers.”

Andelman will also take part in a panel on collaborations, which she hopes to continue when Colette closes on Dec. 20. “In future, I want to be able to jump between different sectors — streetwear, fashion, food, beauty, art — like I do now and not limit myself to a single field. I am curious about everything,” she explained.

Art was the topic du jour as Paris geared up for the opening of the FIAC fair, with scores of special events held across town. Collector Jean Pigozzi said he would return to Colette the next day to sign copies of his book “ME + CO. The Selfies: 1972-2016,” published by Damiani.

“I invented the selfie. I can prove it: it’s in the book. When I was at Harvard in 1973, I took a photo of myself with Faye Dunaway,” he said. The most recent was taken on the streets of New York with Cattelan and Chinese artist Ai Weiwei, but Pigozzi is no longer that into it. “Now that everyone is doing it, it’s no fun,” he shrugged.

At 8 p.m., guests repaired to Colette’s basement water bar for dinner at the Sant Ambroeus pop-up, which runs until the end of the month. “I’m going to sound like I’m 100 years old, but the first cappuccino I ever had in my life was at Sant Ambroeus in New York,” recalled Browne.

Alireza Niroomand, the restaurant’s manager, commissioned 25 artists including Williams, André Saraiva and Kaws to customize plates for a wall display at the temporary space.

An ambassador for men’s wear brand Daniel Cremieux, Niroomand recently featured in a photo shoot for Essential Homme and was gearing up for the eatery’s next project: a pop-up at The Webster Miami during the Art Basel fair in December.

As a giant screen broadcast footage of Browne’s recent women’s ready-to-wear show, staged in Paris for the first time this season, guests settled down to a dinner of tuna tartare and mushroom lasagna prepared by chef Iacopo Falai.

Music producer Frédéric Sanchez said he created the sound environment for the exhibition “Jil Sander. Präsens” opening on Nov. 4 at the Museum Angewandte Kunst in Frankfurt. Meanwhile, designer Ora-Ïto revealed he would be staging an exhibition of works by Anish Kapoor next year at his MAMO art center in Marseille.

Coffee came with macaroons from Ladurée in an unexpected new flavor — Marina Abramović’s Taste. The Prussian blue treats, covered in gold leaf, were the brainchild of Raphaël Castoriano’s company Kreëmart, which specializes in dessert happenings.

“It’s called ‘identity in the form of taste.’ It’s very profound and philosophical,” he said of his so-called Pastry Portrait, for which Abramović answered a series of personal questions. “It’s eight questions, starting with, ‘What is your state of mind?’ and perhaps ending with, ‘What flavor is love?’”