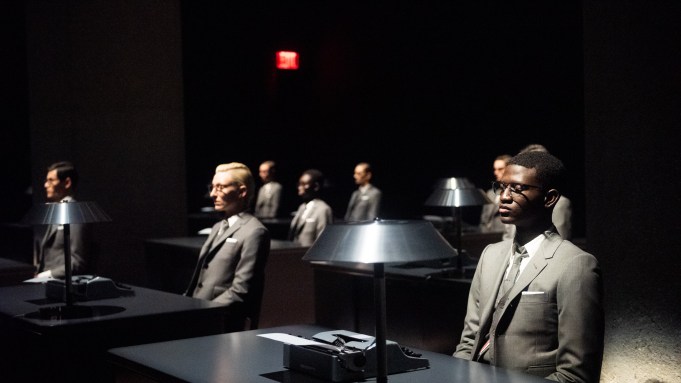 Thom Browne isn’t leaving the past behind.

On Wednesday afternoon, the designer unveiled his Galaxy Z Flip Thom Browne collaboration with Samsung, which had been revealed in San Francisco a day earlier. Browne transported his aesthetic to Sotheby’s for the New York launch party, setting up mini offices to demo the phones and tech accessories (including a digital watch and earbuds) that guests experienced while sipping flutes of Krug Champagne.

The real crux of the launch was a live performance piece, “I’m Not Ready Yet.” Inside one of the darkened gallery spaces, Thom Browne models were suited and seated at rows of desks with two tools in front of them: a typewriter and the flip phone. The room was filled with the incessant soundtrack of the typewriters and ringing telephones as each model took turns opening and closing the flip phone next to them. One by one, as the sentiment from an unseen narrator changed from “I’m not ready yet” to “I’m ready now,” they picked up their briefcases and walked out of the space, leaving their typed work behind.

“The story was really taking something from the past and designing it in such a timeless way that you could bring it forward into the future,” said Browne afterward, as Thom Browne briefcases were reset next to each desk for a second performance. “Everyone was hearing from the future, saying that they weren’t ready yet. And once they really got familiar with the phone, then they realized it was time for them to go and they were ready for the future.”

Design elements of the phone tap into the idea of melding the old with the new, with an analogue ringtone, typewriter sound effects and app icons, which appear in the Thom Browne font and aesthetic. (The phone’s gray exterior with the brand’s signature stripe is also modeled after his signature suit.)

“It was taking a device that people knew and really making it relevant for today, and technologically more advanced than any phone out there,” he added. “And working with a company that approaches design the same way I do, from a quality point of view but also referencing things that people are familiar with, taking technology and moving understandable things into the future and starting a new conversation.”

Like many others, Browne’s first cell phone was a flip phone, and the Galaxy Z taps into that early sentimentality.

“Two or three years ago, I remember thinking there was something so nice about those phones,” Browne said. “So many people have a nice memory of them.”

And while many feel compelled to replace their phones whenever the latest, greatest one gets released, the designer is hoping that his edition has the ability to stay around a little bit longer.

“I want it to feel more timeless than something that is just for now,” he said. “I really wanted it to feel like you don’t have to update [your phone] every six months — or as much as people update phones nowadays.”