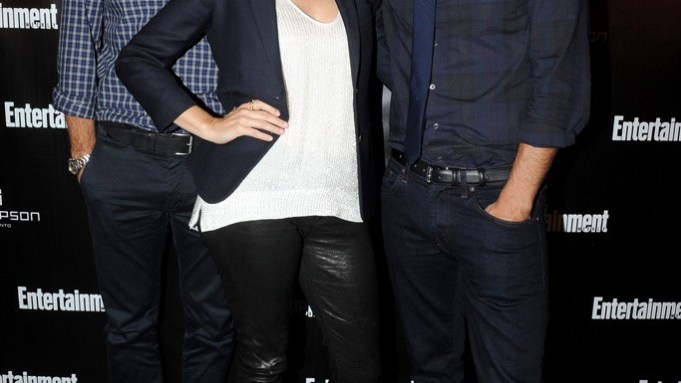 Entertainment Weekly’s Must List Party at the Toronto International Film Festival on Saturday rendered even the most seasoned Hollywood types giddy. “I’m hobnobbing with [Steve] Carrell and Bennett Miller and Tina Fey! Very fun!” said director Shawn Levy, attending the fest for the first time with his film “This Is Where I Leave You.” “I don’t really make festival fare. I spent much of my career in the bigger tentpole-y comedy studio films, and I vowed early on somewhat arbitrarily that I would only go to a film festival if I had a reason to,” he explained. “Plus, I’m Canadian, so this is pretty thrilling.”

Fey, a fellow virgin to the festival and one of the stars of Levy’s film, said, “I’m thrilled to be here. The last time I was in Toronto was when we shot ‘Mean Girls.’” Juliette Binoche opted for a daring look for the afternoon event, held at the Thompson Hotel: A cut-to-there red Prada dress that revealed her bra. “I thought it was a joyful color and it’s good to be joyful after a long day’s work,” pointed out the actress, who stars in “Clouds of Sils Maria” alongside no-show Kristen Stewart. “I miss her!” she said. “I have to leave tomorrow morning at six, so it’s a little bit of a rush and I have to do my packing after three events tonight,” she said of her tight schedule.

Elsewhere in the packed party, Jake Gyllenhaal proudly showed off his scruff to Jean-Marc Vallée, the director of the highly anticipated “Wild,” who will begin directing the actor in “Demolition” next week. “This is day 12,” Gyllenhaal said. Said Vallée, “He’s just growing the beard and taking pictures of himself every day, and then we’ll make something special with his beard during the film.” Gyllenhaal then told Vallée, “I was showing someone a photograph the other day of something. They were like, ‘Why do you have so many pictures of yourself?’ And I’m like, ‘No, no, they’re for Jean-Marc!’”