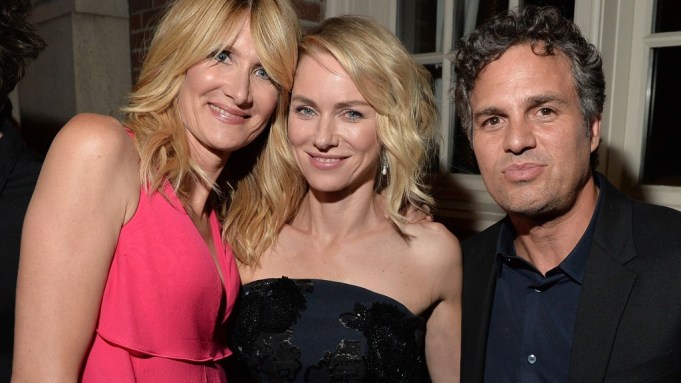 With an endless list of glitzy events on Saturday night, Toronto International Film Festival attendees refused to limit their options. Instead, celebs party-hopped into the wee hours of the morning. One of the more popular stops: the joint Hollywood Foreign Press Association and InStyle soiree, where “It” boy Benedict Cumberbatch held court with Ben Stiller, Steve Carrell and Mark Ruffalo on the outdoor patio of the Windsor Arms Hotel.

Shockingly, few — if any — females surrounded them, although plenty strolled through the event, including Greta Gerwig, Anna Kendrick, Laura Dern, Jessica Chastain and Salma Hayek, one of the few who didn’t stay past midnight.

“It was a good party,” insisted Hayek, in a black Saint Laurent frock. “Unfortunately, I have to work early!” Meanwhile, Naomi Watts was just getting started on the red carpet. She screamed and ran over to hug Ruffalo and then ribbed, “Now move out of my way!” as she posed for photographers.

Food seemed to be on most peoples’ minds, as other guests showed up hungry and converged on a buffet that featured hearty party fare rather than mere passed appetizers and a candy bar.

After InStyle, Chris Evans, making his directorial debut at the fest for the romantic comedy “Before We Go,” partied at the No. 8 pop-up on the Thompson Hotel rooftop alongside “Captain America” costar Anthony Mackie.

Also spotted out and about: Cara Delevingne, who dropped by Soho House for 30 minutes to hang out with Kate Beckinsale, her costar in “The Face of an Angel.”