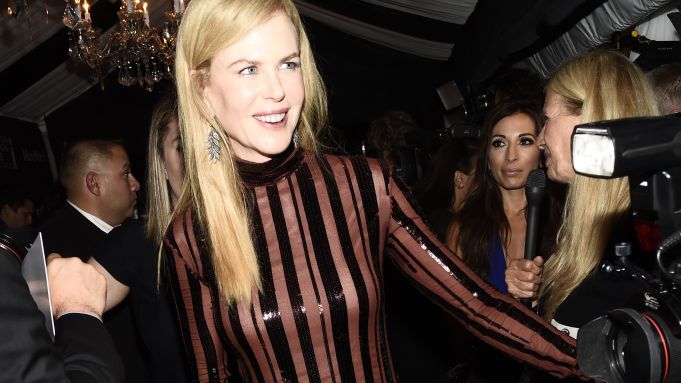 “I’m staying at the hotel,” said a brunette in jeans as she attempted to gain entry to the Windsor Arms Hotel in Toronto on Saturday night. “Who are you?” asked security, eyeing her suspiciously. “Catherine Keener,” she replied. Keener was simply trying to get back to her room, but the hotel was the site of InStyle and the Hollywood Foreign Press Association’s annual Toronto International Film Festival bash.

“He’s in Nashville,” Kidman said, explaining that she was in town promoting her film “Lion” with costars Dev Patel and Mara. “I’m in and out. I’m here and I go home tomorrow,” she added, but, before the actress could head inside, a member of the HFPA asked, “Can I have a kiss?” Kidman obliged, prompting a photographer to tease, “We all get a kiss now.”

“You’re all going to get a kiss?” Kidman laughed. Instead, she offered them her time as she patiently lingered for photos.

Mara wasn’t so accommodating. “Oh? I have to do that?” Mara asked her publicist as she approached the line of shutterbugs. Decked out in an eye-popping red Yacine Aouadi ensemble, the “Lion” star was certainly dressed for the cameras, loathe as she was to stop.

Meanwhile, fresh face Katherine McNamara was taking in the starry scene while rocking a monochromatic Jonathan Simkhai dress. “We shoot in Toronto,” said the “Shadowhunters” star. “We’re getting a little taste of Hollywood right now.” The 20-year-old said she planned on seeing the film “Katie Says Goodbye” on her day off.

Moments later, another notable redhead hit the carpet. “It’s nice to be here. It’s a nice kick-off,” said Amy Adams, who has already won rave reviews for her lead role in Tom Ford’s drama “Nocturnal Animals” and is also premiering the the sci-fi film “Arrival” at the festival.

Adams’ publicist attempted to have her skip the photo line, but she wouldn’t have it. “We all just dance around. I’m so sorry,” Adams told Aja Naomi King and she maneuvered in front of her. Of course, Adams soon was sidetracked and found James L. Brooks in front of her. “I don’t mind,” she said.

Despite the soiree going strong inside, Jay Duplass was all partied out after attending with his “Transparent” castmates. “I can’t wait to lie down in, like, 12 minutes,” Duplass told Jason Ritter as they crossed paths.

Octavia Spencer caught up with her “Hidden Figures” cast and crew. “I drank too much to talk,” Spencer said, bypassing the press line as she made her way into the orchid-strewn ballroom. With speakers blaring songs like Taylor Swift’s “Blank Space” and Mike Posner’s “I Took A Pill in Ibiza,” hotel guests like Keener weren’t likely to fall asleep anytime soon.