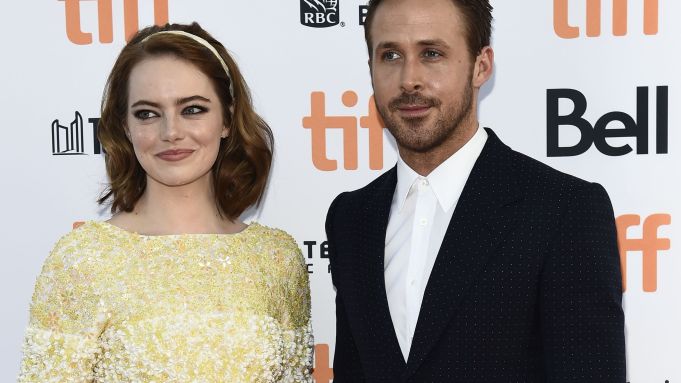 “I have to go. I’m sorry,” Emma Stone apologized as she ran down the carpet and up the steps of the Princess of Wales Theater. Fresh off receiving the best actress prize at the Venice International Film Festival, the “La La Land” leading lady wore a demure pastel yellow Chanel dress as she joined her perpetual costar Ryan Gosling at the film’s Toronto International Film Festival premiere Monday night in Toronto.

“It’s something that I wanted to do because I felt like you could relate to these characters,” Gosling said of playing a jazz pianist who falls for an aspiring actress, played by Stone. The film required Gosling to brush up on his old “Mickey Mouse Club” song and dance skills as the film features a number of sequences that pay homage to musicals of yesteryear. “Even if you didn’t like musicals, you can become emotionally invested in the story. I hope that that happens. I think it’s a hell of a ride and I hope people go on that ride and enjoy it,” he said.

“La La Land” is wunderkind writer-director Damien Chazelle’s second feature after his 2014 drama “Whiplash,” which received five Oscar nominations, including Best Picture. “This one I was trying to make even before ‘Whiplash’,” Chazelle explained. “It’s a real labor of love and the most personal thing I’ve done. I’m really, really grateful that it’s being received well.”

Chazelle said he pulled inspiration from his own experience with “moving to L.A., having a dream, trying to make art, trying to balance art with life.”

John Legend, Rosemarie DeWitt and Callie Hernandez also star in the film in addition to J.K. Simmons, who won a best supporting actor Oscar for his role in Chazelle’s “Whiplash.” Simmons said the project was a full-circle moment. “And I hope the circle isn’t closed,” he said. “I hope it’s the beginning of a circle where hopefully we’ll collaborate on another dozen films before I get smart and retire.”

The Oscar winner stopped short of saying Gosling and Stone might follow in his footsteps, but he did say, “They’re real triple threats. Their dancing is beautiful and effortless.” Added Chazelle, “They’re superhard workers. Ryan learned piano. Both of them learned these incredibly complicated dance numbers and songs. I think what’s even more impressive about them is that they’re able to make everything feel believable and realistic, so that you never lose sight of the characters — even when they’re floating up into the stars.”

DeWitt, who plays Gosling’s sister in the film, gave credit to the director, explaining that Chazelle has an interesting approach to the process. “It’s a little scary because he’s a bold filmmaker,” she said. “He asks a lot of the dancers, the singers, the actors. We would do one take of a seven-page scene where the camera would move through the wall and you would keep going. It’s a testament to Emma and Ryan that they were so on point in doing the music live because Damien directs without a safety net.”