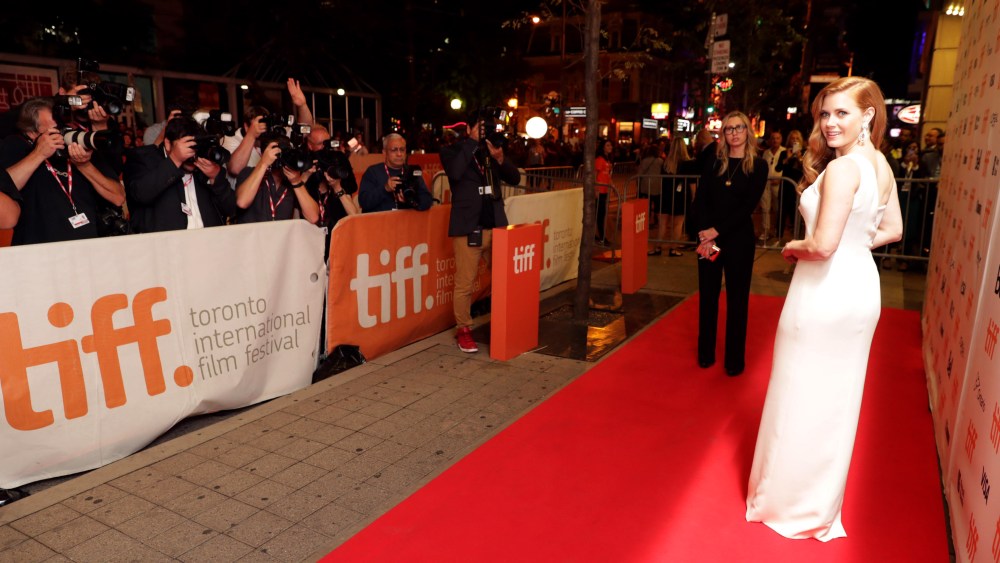 Tom Ford was most likely the week’s top frequent flier. After unveiling his second feature, “Nocturnal Animals,” at the Venice International Film Festival, staging a runway show in New York, and heading back to Italy to receive the Grand Jury Prize, the designer-director headed to Canada for the “Nocturnal Animals” premiere at the Toronto International Film Festival.

“I arrived this morning at about 4 from Venice,” Ford told WWD while walking the red carpet on Sunday night at the Princess of Wales Theatre.

He arrived right on time for his film’s big night. “I’m here until tomorrow and I leave at about 7. But I love Toronto. I’ve got great memories from Toronto from the last time that I was here. It’s a beautiful city. And I’m happy to be here.”

In “Nocturnal Animals,” a revenge thriller based on the 1993 novel “Tony and Susan” by Austin Wright, Amy Adams plays an art gallery owner. “Amy can act without moving a thing on her face — without saying anything, you know?” said Ford. “Well, she does move. Her face moves obviously, but she doesn’t have to speak to act. And for a big portion of this film, her character is reading a book. I needed an actress who could really help the audience feel what she was feeling.”

Jake Gyllenhaal plays the ex-husband whose novel Adams’ character becomes enthralled with. “Jake has become really a fearless actor,” Ford continued. “He goes from a mild-mannered guy to somebody who has literally lost everything in his life. He does a terrific job.”

When asked why this was a story Ford was eager to tell, he said, “It resonated with me because it’s really about finding those people in life that you love and holding onto them. I’m a very loyal person. I’ve been with the same man for 30 years. I’ve worked with this wonderful woman next to me [right-hand woman Lisa Schiek] for almost 25. There are people in my life that I just don’t let go of and that’s what this is about, not letting go of those people that are important to you.”

Meanwhile, Adams said she developed her own sense of loyalty through filming with Ford. “I hope it doesn’t take him seven years to make another [film] and I hope I get to be in it,” she said. “I’d love to work with him again. He’s got a great vision and a wonderful attention to detail. I worked with him as a scene partner more than I worked with any other actor. He’s also just a wonderful presence on set to get you ready emotionally and psychologically.”

Adams said the film has stayed with her long since shooting. “Any film I do, that I really invest in, changes me,” she said. “I take something away from everything. This one, in looking at relationships and choices we make inside relationships, and not giving into the fear, [I learned] you have to love someone through the fear. That’s what I took away.”

Naturally, the entire cast wore Tom Ford. “Do you think I would wear a suit other than Tom Ford to this party? No way! I feel like I’d get in trouble,” laughed Armie Hammer, who got involved in the project after Ford called him directly. “He said, ‘I’ve got this thing. Do you want to do it?’ I said, ‘Sure. I’d do anything for you.’ He has such a specific eye. His first movie was a moving piece of art. This one is very different. It’s visceral and gritty and realistic. To see the same director turn out two very different projects is also a testament to how good of a filmmaker he is.”

Meanwhile, Ellie Bamber said she didn’t know him prior to filming. “I taped [my audition] and then he called me in and then I met with him. I was meeting Tom Ford, you know, so I remember what I wore because that was a little bit of a tricky thing. I mean, ‘What do you wear to meet Tom Ford?’ So, I wore these flared jeans, this white shirt and some clogs. He told me that day, ‘You have great personal style.’”

As for how the cast and crew planned to celebrate the film’s success, Aaron Taylor-Johnson said, “Maybe we’ll go clubbing until the early morning.”