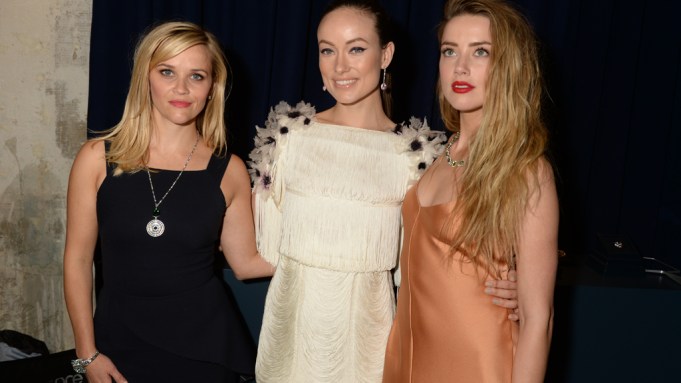 On any given night, ABC Kitchen is a pretty safe bet for a celebrity sighting. But should one have passed the Flatiron eatery on Wednesday night — or even better, scored an invite inside — well, jackpot.

Despite the bold-faced guest list and cocktail dress code (save for Dree Hemingway, who underlined her “cool girl” persona by showing up in flared jeans and a clichéd bohemian peasant blouse), it was a much more casual affair by Tiffany standards. Past celebrations for the Blue Book collection have included a takeover of the Guggenheim museum for an after-hours gala and a Great Gatsby-themed blowout held in a giant tent shaped like a Tiffany’s jewelry box, constructed over the Rockefeller Center ice rink. By those standards, this was a decidedly quaint affair, and as a p.r. type was quick to point out, the brainchild of the brand’s design director, Francesca Amfitheatrof. “I wanted people to actually be able to see the jewelry — after tonight, it vanishes into the world,” Amfitheatrof said by way of explanation, gesturing toward a display of bling behind her. Of course, those jewels certainly negated a bit of the intended low-key vibe of the evening, with rows upon rows of pearls, diamonds, emeralds and just about every other covetable gemstone that made up the “Art of the Sea” collection situated toward the rear of the restaurant. “There is certainly a lot of security around,” Amfitheatrof noted.

It was true — the display was flanked by a number of burly men in suits and headpieces, a stark juxtaposition against the slew of waif-y models who populated the space. Witherspoon, for one, was grateful for the security fleet’s presence. “It makes me really happy — I get nervous wearing these types of pieces,” she said. Who could blame her? For the occasion, Witherspoon had chosen a necklace featuring a 19.44-carat emerald-cut green tourmaline pendant, worn with a matching tourmaline and diamond bracelet. Nerves were warranted. “I love this ocean theme,” she said, gesturing toward her borrowed jewels. “I got to see how they make the bracelet, and it’s these men with these tiny little tools creating it. It’s incredible. It’s one of those things that you get so emotional about. To know that these pieces will go into people’s families and live there forever is really special.”

The logic behind Heard’s jewelry of choice — a necklace featuring 80.45 carats of green tourmalines — was less emotionally charged. “I loved the green,” she shrugged. The actress had other things to worry about, namely two movies premiering at the Tribeca Film Festival — “The Adderall Diaries” and “When I Live My Life Over Again” — and perhaps most importantly, a 29th birthday party to plan. “They’re good plans,” she said of the impending celebrations. “But I’m gonna keep them secret.” Well, should she need to jazz up her birthday ensemble, may we suggest a certain green necklace?