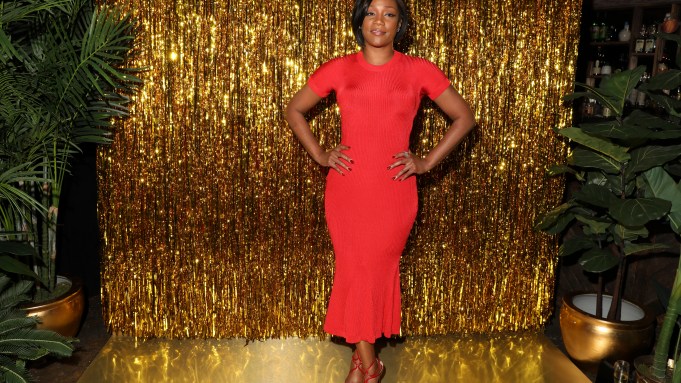 Prior to coming downstairs to the cocktail party before Jimmy Choo’s Saturday night dinner in New York, Tiffany Haddish had a good cry.

“Oh, I just won an Emmy,” she said inside the bar below the restaurant Chinese Tuxedo. “I did.”

She’d just received a call from the Television Academy prior to her arrival informing her of the good news and suffice it to say, the win for Outstanding Guest Actress in a Comedy Series at the Creative Arts Emmy Awards brought her to tears.

But wait, was this just another one of her hilarious jokes? Was this a bit, a shtick?

“She’s not kidding,” Law Roach, who came with Haddish to the dinner, confirmed flatly.

The “Night School” actress has been busier than ever, and her New York Fashion Week schedule reflects that abundance. But it seems everywhere she goes, she said, people look at her expecting something funny and absurd to come out of her mouth.

“You’re not going to get that every time, because I’m a human being,” Haddish said. “When I was in high school, people expected me to be funny every day too, but that’s not normal. Some days you’re just chill, and I’m going to be that way sometimes because I’m a, you know, human being.”

And how has her approach to comedy changed since those days?

Hayley Kiyoko knows Haddish from the VMAs, which Haddish hosted, and where Kiyoko won the Push Artist and Best New Artist awards. She said her life is a little different since the wins, because more people recognize her music and know her now.

As more guests like Young Paris, Molly Simms, Miles Richie and Charlie Puth — who canoodled with his girlfriend endlessly in the corner of the bar — filed in, sipping flutes of Perrier-Jouët, Lily Aldridge made her own entrance. The five-months-pregnant model, who is one of the faces of Jimmy Choo, got on the small stage set up for photographs and showed off her baby bump. Aldridge wore a dress meant to accentuate her midsection and looked fresh from the runway, where she in fact had come from hours before, having walked Brandon Maxwell.

“The fact that Brandon let me embrace and honor this moment was so special to me,” she said. “It was so different, walking down the runway pregnant; I felt really empowered.”

After fashion week, though, Aldridge has big plans to chill out.

“I just have a few more days and then I’m going to go home and be cozy,” she said.

With Two New Collections and a Film, How Does Humberto Leon Do It?