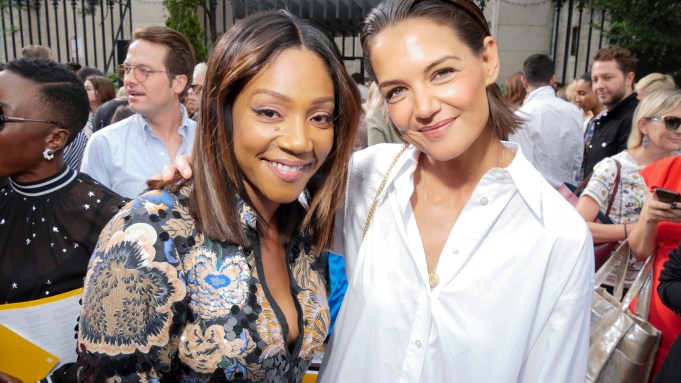 “This is my second show and this is my first time I’ve been at fashion shows ever — besides at the VFW [Veterans of Foreign Wars] for veterans; I’ve been at a lot of those. This is real for me,” she said from the front row at Tory Burch, where she was seated next to Julianne Moore. How’s the experience been so far? “Pretty fun,” Haddish said.

“Crazy Rich Asians” star Gemma Chan had flown into town for only one day of fashion week. “And then I’ve got to get back to London to get ready for working. I’m starting to film a drama,” she said after the show, which took place in the courtyard at the Cooper Hewitt Smithsonian Design Museum. Her reaction to the show? “I was blown away. I thought it was beautiful — it made me just want to go on vacation immediately,” she said. (Favorite looks included a dress with gold coins and the sneakers.)

“I’ve been a fan of [Burch] for years, I really admire her as a person, I think she’s inspirational to women as an entrepreneur and as a philanthropist,” Chan added. “And every season I think she creates beautiful things that make women feel good, and they’re elegant, but it’s also very accessible. And I love that she’s inspired by, clearly, the world.”