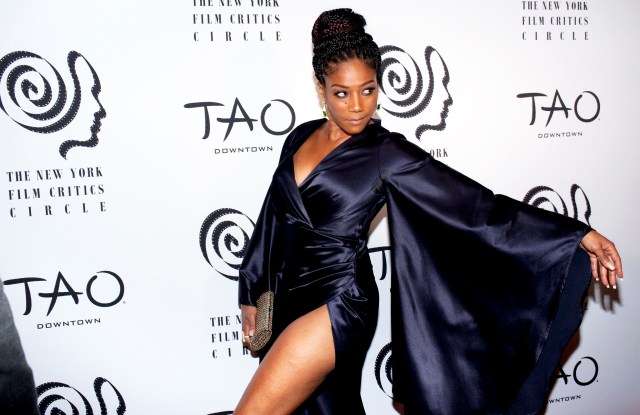 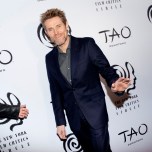 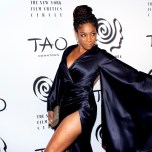 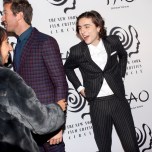 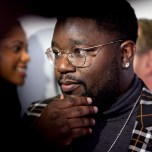 The 23-year-old was awarded best actress for her role in “Lady Bird” at the New York Film Critics Circle Awards dinner at Tao Downtown on Wednesday evening, which launched this year’s string of film industry honors that continues Sunday with the Golden Globes and ends with the Oscars in March.

Ronan’s given name, which means “freedom” in her native Ireland, is now the talk of Hollywood and beyond, but that was not always the case. “I was literally the only Saoirse in the world,” she said. “Apparently [the name] is now finally on the top 100 list of baby names in the world. I’m very much onboard with this.”

The actress is also onboard with the planned anti-harassment protest Sunday by joining those donning black to the Globes. “With well-known people in our industry — and hopefully other industries — continuing to talk about [harassment], stand together and show we are united, we will affect the perspective of young people and [change] what it means to be a woman,” she said.

Joining her in these sentiments was “Lady Bird” director Greta Gerwig, who won best film at the NYFCC. Donning a white Oscar de la Renta gown Wednesday, the 34-year-old kept mum as to whether she will join Sunday’s sartorial demonstration. “I’m going to let that moment be the moment when it happens, but I’m very excited,” she said.

Timothée Chalamet, who won best actor at Wednesday’s ceremony, was joined in support by his “Call Me By Your Name” costar Armie Hammer and was most delighted not with winning an award, but being in good company while doing so. “Beginning to be in [awards season] now, the physical [experience] is not as gratifying as talking to artists, actors and directors that I have been studying for years.”

The native New Yorker expressed excitement at meeting Paul Thomas Anderson, who won best screenplay for “Phantom Thread,” but, alas, Chalamet’s hopes were dashed as Anderson was unable to attend. “I’m bummed since he’s one of my favorite filmmakers.”

“Phantom Thread” actress Lesley Manville, who will skip the Globes on Sunday to begin rehearsals alongside Jeremy Irons in the West End production of “Long Day’s Journey Into Night,” accepted the award on behalf of Anderson.

Reading a letter from Anderson, Manville continued, “’Thank you for this vote of confidence and boost of ego. It’s wonderful to win an award, especially when you don’t have to wait up to find out if you’ve won [it].’”

While there were many stars in the room, including Edward Norton and Willem Defoe (who won best supporting actor for “The Florida Project”), none shone quite as bright as actress and comedian Tiffany Haddish, who was singled out by Anderson in his pre-written speech.

“I hope you all have a wonderful night and before Lesley says goodnight,” continued Manville in Anderson’s words, “perhaps she could relay a message from me to my hero, Tiffany Haddish.”

The 38-year-old, who won best supporting actress from NYFCC for her role in “Girls Trip,” excitedly exclaimed, “I’m right here girl” at mention of her name as Manville continued: “He says, ‘Tiffany, I know that everyone wants to work with you now, but please may I cut to the front of the line,’” he offered before Manville gave the director’s cell phone number to Haddish — and the rest of the jubilant crowd. “’Please call or text me anytime.’”

For her part, Haddish stole the show with a lengthy acceptance speech that blended both comedy and raw emotion — and made several tongue-in-cheek passes at a blushing Michael B. Jordan, who earlier presented pal Rachel Morrison with the best cinematography award for “Mudbound.”

Addressing the room filled with writers, Haddish noted that she cares not what critics may say about her as long as they are taking notice. “I know some people in here are going to talk s–t about me. You know why it’s OK? Because you care enough to say something,” she continued. “I’m glad you see me because there have been so many years nobody saw me. When you’re a little kid going through the system, you wonder, ‘Does anybody really know I’m alive?'”

The actress, who spent a portion of her youth in foster care, went on to mention others like her who previously were without a voice or role model in the industry. “To be able to be this example — there are so many people like me that you guys have no clue about, but they are coming because I kicked the f–king door open,” she exclaimed, raising her glass in the air, as the room erupted in a standing ovation.

They Were, and Now They Are…Cryotherapy, ‘Cat Person’ and Cardi B

The Arts and Culture Scene