The jewelry house set up its &quot;Fifth and 57th&quot; installation at the Old Selfridges Hotel. 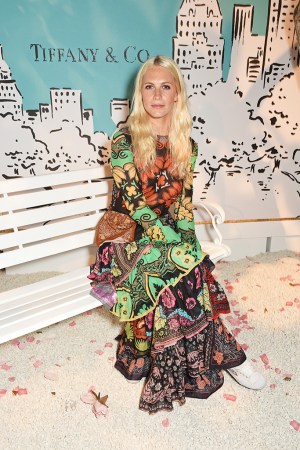 Poppy Delevingne, Caroline Issa, Zara Martin, Roxie Nafousi and food blogger sisters Jasmine and Melissa Hemsley were among those who turned out to see the installation, which aims to give visitors a sensory experience of New York. Tiffany had set up towers of boxes to resemble New York buildings, and projected images of Manhattan street life or the city’s skyline at sunset onto the structures — with sound effects to match — so visitors could feel as if they’re walking in the city.

For Issa, the scene sparked memories of trips to New York when she was a student in Philadelphia. “We’d sneak off to have adventures in NYC, so that food cart is a real walk down memory lane,” she said. The Tank magazine publisher said that she has a number of projects on the boil – her Tank agency has made a film for Mulberry’s fall campaign, while her fall collection for Nordstrom is set to hit stores soon. She’s also taking over Miu Miu’s Instagram account, in the lead up to the labels’ resort show on Saturday.

Delevingne — sporting newly bleach-blonde hair — admitted that images of skyscrapers made her “nostalgic” for New York, where she’s a frequent visitor. As to her new hair do, the model said she was channeling “Game of Thrones” character Daenerys Targaryen. “I’m the mother of dragons,” she said with a grin.

The installation runs from July 3 through 12 at the Old Selfridges Hotel. Alongside experiencing the projections, visitors will be able to sample New York-inspired cocktails, have their Tiffany purchases engraved and listen to live music performances during the show’s run.