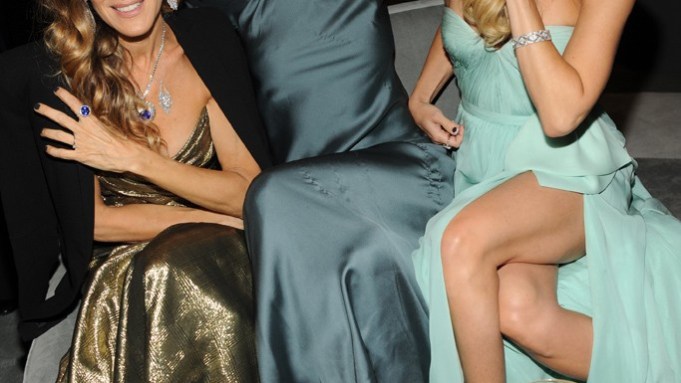 Tiffany & Co.’s signature blue box got a healthy dose of steroids at Manhattan’s Rockefeller Center on Thursday night for the brand’s Blue Book Ball to toast its new Jazz Age collection tied to Baz Luhrmann’s upcoming film adaptation of “The Great Gatsby.” The plaza’s ice skating rink had been transformed into a Roaring Twenties supper club, all housed underneath a 31-foot-high Tiffany blue box topped with the brand’s signature white bow.

Michelle Williams, Jessica Biel, Kate Hudson, Alice Eve, Lily Cole, Carolyn Murphy and Poppy Delevingne were among the guests who walked through the Channel Gardens off Fifth Avenue before descending into the luxe, “Gatsby”-inspired venue, where pieces from the Blue Book collection were on display in glass cases. A 10-piece orchestra and Rockettes-esque “diamond dancers” serenaded the crowd with jazz musician Brian Newman while feather and sequin-wearing aerialists glided over the tables (and later, singer Megan Hilty performed a rendition, rather appropriately, of Cole Porter’s “Let’s Misbehave”). Cigarette girls worked the room, but instead of offering smokes, they carried iPads. In a contemporary touch, guests could get their photo taken and have it immediately sent to their e-mail.

“I like the makeup, the glittery dresses, the jewels, the headbands; how it’s just so over the top,” said Gwyneth Paltrow of the decade’s distinctive flapper aesthetic.

Sarah Jessica Parker said that she was an F. Scott Fitzgerald fan.

“I think anyone who loved English in high school read [‘The Great Gatsby’] and I happily read it. It wasn’t at all a burden or a chore for me. I’ve always loved that book, but I love his writing,” she said. “In fact, there’s a great movie that when I was a little girl was on PBS that I think about quite often, and it’s called ‘Bernice Bobs Her Hair.’ I’ve always loved that period…in literature, in culture, in architecture. I think people felt an enormous amount of freedom.”

Carey Mulligan, who plays Daisy Buchanan in Luhrmann’s film, was granted access to archives from the Fitzgerald estate at Princeton University in her research for the role.

“I read Ginevra King’s love letters [to Fitzgerald]. They sat by my bed for months. She had the most amazing turn of phrase, she had to be some sort of genius,” Mulligan said. Filming, which took place in Sydney, proved to be slightly hazardous for the actress.

“At one point, [costar Leonardo DiCaprio] and I were filming a montage where I start playing golf. And he was golfing for a second, and he took a swing and he smacked me so hard around the neck I was momentarily dazed. But it was so painful it was funny. And he was so lovely,” she said. “Actually, there were a couple times I hurt myself, and he was the first person to pick me up off the floor.”