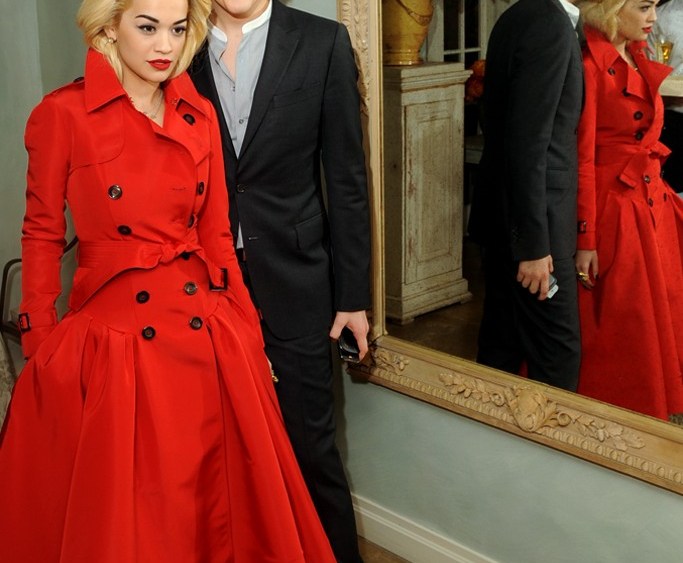 Sky Ferreira was on the first floor of Anna Wintour’s town house in New York’s West Village on Tuesday evening in an updo and black blouse with a sheer off-white scarf, looking like a Goth Holly Golightly, which was the point. The CFDA/Vogue Fashion Fund was hosting its annual cocktail reception, where finalists showed off the fruits of a challenge that required each to premise a design around either “The Great Gatsby” or “Breakfast at Tiffany’s.” (Sponsor Tiffany & Co. provided the jewelry for Baz Luhrmann’s upcoming F. Scott Fitzgerald screen adaptation; its relationship to the latter film needed no explanation.) Each designer or team had been paired with a model of some note — a few professional, most otherwise — to display the wares. Justin Salguero and Daniel Silberman of eyewear firm Illesteva had provided the black Wayfarers and pearl chain that completed Ferreira’s Hepburn-esque turn. Elsewhere, Caroline Trentini worked the room in Jazz Age-ready tennis whites, complete with visor, provided by Max Osterweis and Erin Beatty of Suno. Actress Amanda Seyfried strode around in a pair of jeweled heels by Tabitha Simmons, inspired, the designer said, by Twenties-era headbands.

“It was a tough choice because I love both,” designer Wes Gordon said of picking his inspiration for the British singer Rita Ora, who stood beside him in a red trenchcoat dress. “‘Breakfast at Tiffany’s’…the last scene when she’s running through the rain in the trench, to me, is as much an iconic moment in that film as the black dress in front of the window at Tiffany’s.…The idea of doing a trench dress really appealed to me.”

The pair hadn’t met prior to the CFDA setup, though they had reaped the mutually beneficial rewards of social media.

“I became a fan recently because I performed in his leather trousers,” Ora said.

“She got me so many Twitter followers,” Gordon added.

The following night, the CFDA held its biannual board meeting followed by cocktails for 26 new members. Francisco Costa, Tory Burch, Zac Posen, Mary-Kate and Ashley Olsen, Elie Tahari, Keren Craig, Georgina Chapman, Derek Lam, Robert Geller and Maria Cornejo were among those toasting the new arrivals at the Bleecker Street CFDA headquarters. “It’s like joining a family that I have known about for a long time,” said new member Joseph Altuzarra. Other incoming designers on hand included Vince Camuto, Current/Elliott’s Emily Current and Meritt Elliott, Pamela Love, Lisa Perry and Tabitha Simmons. It wasn’t just the newbies who had reason to celebrate. Tommy Hilfiger, Jenna Lyons, Mimi So and Kara Ross were named to the CFDA board, as Costa, David Chu and Patrick Robinson rotated out.