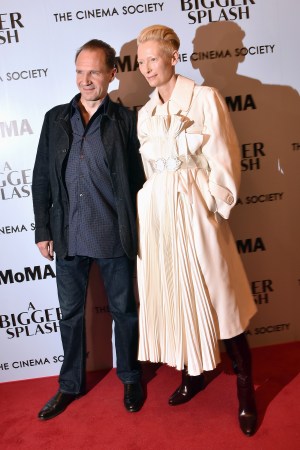 On Thursday night, tributes to the late musical icon Prince were popping up all around the city: Spike Lee held a block party in Brooklyn; the Apollo Theater in Harlem displayed a remembrance on its marquee; and the Prince Street subway station was flooded with camera-toting tourists. Uptown at the Museum of Modern Art, Tilda Swinton offered a few personal memories of the singer before a Cinema Society-hosted screening of her film, “A Bigger Splash.”

“I have two Prince moments,” said Swinton in an elaborate white Maison Margiela ensemble. “One is that years and years ago in the mid-Eighties, when I first came to New York, a friend of mine brought me to Nell’s. I was super jet-lagged, and my friend said ‘No, come on, hang out! hang out!’ And at midnight, or maybe even later, Prince turned up having just played Madison Square Garden, and he played for another three or four hours for about 60 of us. He played about 15 instruments. He was like Mozart — an incredible musician,” she continued. “The other amazing moment for me with Prince was when we went to the Oscars, we ended up in his house. Which is an amazing sentence to say. Stevie Wonder was singing ‘Superstition.’ That was like a dream.”

In “A Bigger Splash,” Swinton plays Marianne Lane, a rock star who goes on vacation with her boyfriend (Matthias Schoenaerts) to the Mediterranean. They are unexpectedly joined by — and provoked by — Swinton’s former lover (Ralph Fiennes) and his sultry daughter (Dakota Johnson). For the screening, Swinton was joined by Fiennes and director Luca Guadagnino, as well as Donna Karan, Judy Greer, Michael Stipe and Margarita Levieva. The film is a follow-up to Guadagnino’s “I Am Love,” also starring Swinton.

“I wasn’t going to make this film, and I wasn’t going to make a film this particular year,” Swinton offered. Guadagnino, a longtime friend and collaborator with Swinton, convinced her otherwise. “He just said, ‘Come on, come and be with us.’ There was something about this story, this woman who’s at a point in her life where she really wants to step back. It really touched me.”

If the plot sounds familiar, that’s because it is: The film is a remake of “La Piscine,” which starred Jane Birkin and Alain Delon.

“No, I deliberately didn’t see it,” Ralph Fiennes said of the 1969 version. “I started to watch it one day, and I was about 50 minutes in, and I thought, ‘I’m going to have this movie playing in my head and I’ll be constantly referencing it.’ I wanted to imagine it as a new film. In my head, it is.”