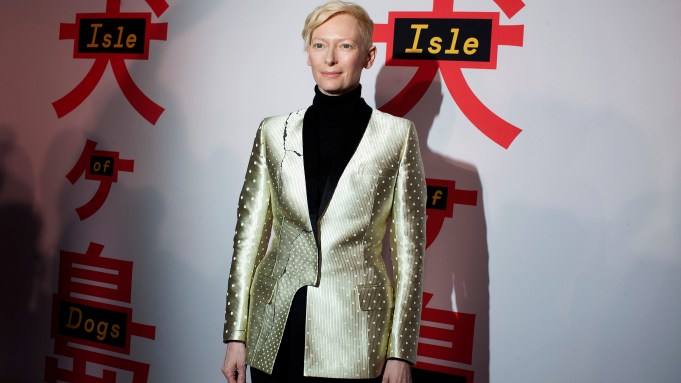 “I’ve just noticed my jacket has spots on it and the lead dog in the film is named Spots,” said Tilda Swinton of her metallic gold Haider Ackermann blazer at the “Isle of Dogs” premiere Tuesday evening. “I’m just going to pretend it was entirely intentional and Haider designed his previous collection around Spots the Dog.”

Swinton, who portrays a loveable sagacious pug named Oracle in Wes Anderson’ latest stop-motion animated feature, was on hand for a special screening of the film held at the Metropolitan Museum of Art.

An animal lover, the Oscar winner currently has five dogs, “several” roosters and a 12-year-old tortoise named Slowly at her home in the U.K. “They live very, very long lives so everyone is fighting over who’s going to inherit Slowly,” she explained.

The actress suspects that Anderson (who she described as “a pal who makes genius films”) cast her specifically as a pug as a delayed response to an unusual request she made while filming “Grand Budapest Hotel.”

“I had asked Wes if my character in that film could [be surrounded by] a cloud of pugs and that wasn’t possible,” she revealed. “Maybe he was paying me late by actually making me a pug. If I had my choice [of characters] though I would have absolutely been Oracle the super pug. She is a phenomenon.”

Greta Gerwig was equally smitten with Swinton’s character. In the film, which is set in a fictional Japanese archipelago and opens Friday, Gerwig voices the character Tracy Walker, a teenage (human) political activist, but confessed, “I don’t want to pick a favorite character, but [Tilda’s] is my favorite. Do I wish I was that pug or do I wish I was Tilda Swinton? It’s all sort of mixed up in one thing that I’ll never be able to extract.”

Wearing a black and marigold animal print turtleneck by Proenza Schouler, the “Lady Bird” director was joined by a handful of college friends from her time at Barnard for the after party held in The Met’s capacious Grand Hall. “Honestly, I did a grand total of six hours of work and [Wes] made something amazing. I feel like I’m going to get far more credit for this than I deserve because this is all Wes.”

That was the consensus among Anderson’s cast including Bill Murray, Liev Schreiber, Frances McDormand, Akira Ito, Courtney B. Vance, Jason Schwartzman and Jeff Goldblum, who playfully urged fellow dog owners to avoid “dressing them up for your own cheap entertainment.”

“I come from ‘Jurassic Park’ so I would, of course, be opposed to the exploitation of animals for our own entertainment,” he said dryly before drawing a parallel between the fictional film’s narrative and current real-life political and social issues.

“It’s about the sweet devotion and bottomless love of a dog and a boy — a love that we could [stand to] share and model amongst ourselves and all manner of people and species,” said the actor. “We also see [in the film] a band of young voices authentically raised for a cause and that could [actually] move the needle. It’s quite timely.”

Ahead of the screening, Anderson took the stage to introduce the cast and offer a few words of wisdom from Rosamond Bernier, the late journalist famous for her erudite and entertaining art lectures at The Met.

“I happened to re-read her obituary today, as one does,” said Anderson, which evoked a ripple of laughter throughout the auditorium. “It ended with a quote from her. She said, ‘In a naughty world, the Metropolitan Museum has been an oasis of civility and civilization. To have been connected with it even in a modest way has been a joy and a privilege.’ I feel that way here tonight — although our way is even more modest because we’ve actually hired the room. Nevertheless, I have the same feeling.”

Nyle DiMarco Lends His Voice to ‘Children of a Lesser God’

Making Broadway History in Pants: Behind the Modern Approach to Costume Design for Disney’s ‘Frozen’