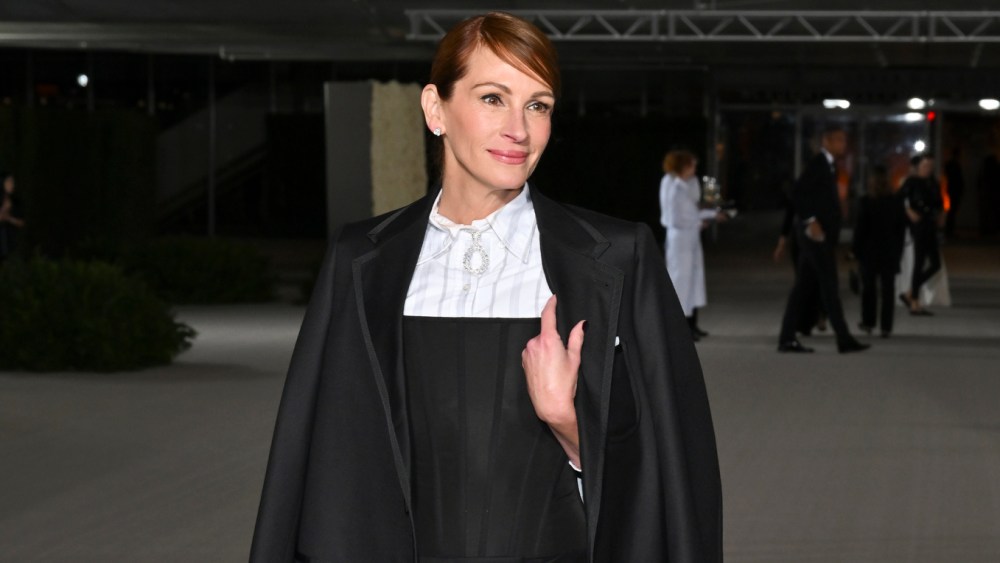 “I’m very bemused by this hedge,” Tilda Swinton said, in only the way she can, on the way into the Second Annual Academy Museum Gala on Saturday in Los Angeles.

She was referring to the artificial barrier created to keep reporters at bay on the red carpet, and it was amusing.

“I’ve had a tiny relationship with all of them in different ways,” Swinton said. “I’ve worked with Miky Lee in Seoul. She is a great, great inspired studio head…and I was once photographed by Steve McQueen. That was my moment with him. And Julia Roberts once came for dinner at my house in Vancouver. That’s my context with her. I’m looking forward to seeing all of them.”

Swinton was dressed in a surrealist Schiaparelli gown for the event, where there were several mega fashion moments, including Roberts in a custom black corset and trouser skirt by Thom Browne; Olivia Wilde in a revealing crystal embroidered pink feather trimmed gown by Alexandre Vaultier; Jodie Turner-Smith in a bright green Gucci gown with cerulean blue feather trim, and Kaia Gerber in a sheer black draped turtleneck and skirt by Alaia.

“I’m very lucky. Daniel Roseberry is a friend of mine. We thought this would be an appropriate thing to wear for this very, kind of eternally Hollywood moment. I mean, this is proper Hollywood,” Swinton said of her look and the Schiaparelli designer.

Jessica Chastain arrived with Eddie Redmayne, and the two were like a comedy duo in the best way.

“I’m excited to see all the people being honored,” said “The Good Nurse” actor. “Especially ‘The Pretty Woman.’ The prettiest woman,” said Chastain.

“I have met her once on stage. She gave me a prize and I made a fool of myself,” Redmayne laughed.

Chastain arrived in an Oscar de la Renta gown with a dramatic cape. “It’s a beautiful cape. And there was a moment when you were walking down, the wind was blowing it. It was a knockout,” said Redmayne, in Prada.

“You know Eddie started out as a model…That’s why he’s so fashionable,” Chastain said, ribbing Redmayne.

“Are you auditioning to take over James Corden’s show?” he said.

“I’m not used to doing press with someone, a man, who is so stylish and fashionable. And it’s making me a little insecure. All these pictures we were taking together, I’m like, ‘Wow, are you going to do your model poses?’”

“Always. Always a bit of a deathly stare,” Redmayne said.

Actor Jay Ellis arrived at the museum dedicated to film history, reflecting on the most fulfilling role he’s had to date, in “Top Gun: Maverick.”

Among the fashion contingent in attendance were Jeremy Scott, costume designer Arianne Phillips and jewelry designer Irene Neuwirth, who is getting ready to open her first New York store.

Kate Mulleavy of Rodarte arrived solo because her sister Laura was home sick.

“It’s so funny, because we’re always together, I have to say. When I was walking, I was like, ‘Am I doing this right?’”

“We made this dress, my sister and I. It was on our spring 2022 runway in New York. It was just a special show for us, and I just remember saying to her, ‘I love red. I’d really love to wear that dress in red.’ And we made it. It’s a customization of something we did.”

Although Rodarte did not show during New York Fashion Week in September, Mulleavy said they are thinking about returning in February, while working on other creative projects, including their second film.

After guests arrived they were ushered into Fanny’s, the museum’s restaurant, where Champagne and “the world’s best martinis” were on offer, and Spike Lee caught up with Ron Howard in a corner booth.

The award ceremony was held on the Dolby Family Terrace with its dramatic views of the Hollywood skyline.

“Here we are in this beautiful place that celebrates what we do at our best, over 100 years of giant stars in the sky…Audrey Hepburn, Sidney Poitier, Gregory Peck…,” Clooney mused. “But as we look at ourselves the last couple of years, we haven’t always represented ourselves the best, quite honestly, there’s been a few too many court cases and slaps…and sometimes it feels like we’ve gotten too far away from Sidney and Audrey.

“I’ve never been more proud than when some actor comes up to me and says ‘What was Gregory Peck like?’ And Gregory Peck was exactly what you want him to be. Exactly. Julia Roberts is exactly what you want her to be. She’s talented, beautiful, smart, she’s funny, she’s kind, compassionate, she’s an incredible mother. She’s a fantastic wife, she tells me, and she’s a great fake wife and above all, she’s a great friend probably to everyone in this room. She is now and has always been an icon….Thank you for representing us at our best,” he said.

“To be iconic, I’m more ironic than iconic,” Roberts said in her speech. “Everybody dream your dreams and kiss each other a lot…”

The Visionary Award was presented to Swinton by longtime friend and collaborator, Italian director Luca Guadagnino. “With her enormous curiosity, joy of living and anti-conformism, Tilda has proved to be one of the greatest artists living today,” he said of the actress, who has been in more than 60 films. “Tilda understands form and she constantly surprises us with her idea of form from cinema to fashion to art.”

“There’s a huge divide in the world right now and what we can do as artists and an industry is to inspire and unite people…Cinema can be a force for good, and today more than ever, at any time in recent history, it needs to be reinforced,” McQueen said.

Producer and Academy Museum trustee Miky Lee received the Pillar Award from Jeffrey Katzenberg. “She is a blockbuster force of nature who is perhaps more than any single individual has been responsible for Korea’s incredible emergence as a world leader in entertainment,” he said of the executive, who helped bring to screen “Snowpiercer,” “Parasite,” and “Decision to Leave,” among many others.

“My vision is to build a bridge not just between East and West but between talented creators and their dreams,” Lee told the crowd.

The evening culminated in a surprise performance by a diva who out-diva-ed them all: Diana Ross.

Taking a special stage set up in the middle of the room, and dressed like an icon award statuette herself in a mirrored outfit, she got them all on their feet.