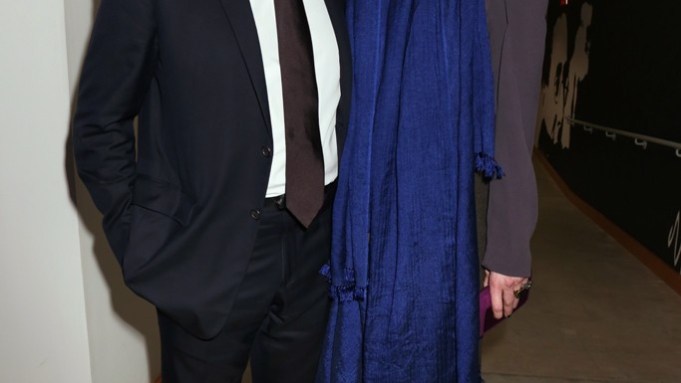 The upstairs lobby of the Pershing Square Signature Center in Manhattan’s theater district felt a bit like an Italian city-state on Monday night as a throng of Italians, and the Americans who love them, turned out for Venetian Heritage Inc.’s 2012 gala. The U.S.-based nonprofit, which raises funds to preserve the city’s cultural institutions, hosted the only U.S. performance of “Caro Luchino,” a 90-minute homage to Italian stage and film director Luchino Visconti narrated in real time by Tilda Swinton and Richard Gere.

After a cocktail reception, guests including Michael Stipe, Peter Marino, Waris Ahluwalia, Sandro Kopp and chairman Isabella Rossellini filtered into one of the recently opened (and Frank Gehry-designed) space’s theaters to watch the Guido Torlonia-directed piece, which, as billed in the production notes, featured “a reading interwoven with a collage of memories, interviews and letters in a discovery of the lost world of the great director.” Part screening and part staged reading in English, French and Italian, the performance had Gere and Swinton taking turns narrating Visconti’s life from turn of the century Milan to his late period master works “The Leopard” and “Death in Venice.”

Heady stuff to be sure, but the format was tough to boil down to a simple phrase. “Live-action historical documentary” seemed pretty close.

“Is that what it was?” Swinton said as she stepped out from backstage in a billowy Haider Ackermann blouse and pants before dinner was served. “I like that. I can’t remember what you said, but it sounded really convincing.”

With her work for the evening over, WWD asked whom she might want narrating her own life if it ever came to it. The actress laughed and thought for a moment as a group of photographers worked their way towards her and Gere.

“They want to do one with Guido,” a Venetian Heritage representative explained.

“I’ll get back you on that,” Swinton said as flashes went off and a different sort of historical documentary got under way.