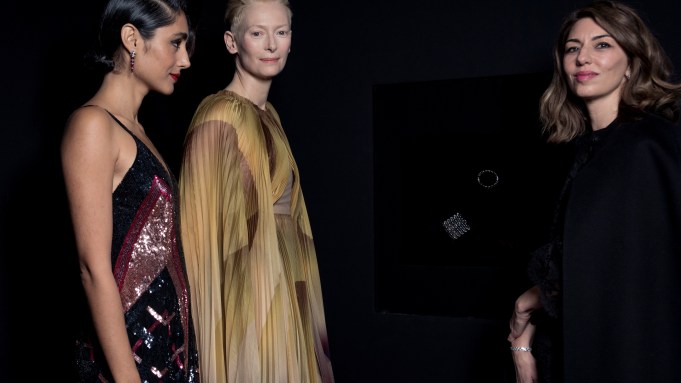 PARIS — Cartier made a high-profile comeback to Paris Couture Week with a dinner celebrating the launch of its Galaxies de Cartier collection.

But first they visited an adjoining space, where the creations were presented in glass display cases amongst the museum’s collection of giant crystals.

Swinton was particularly taken with a ring featuring diamonds mounted using a “serti vibrant,” or trembling setting, inside a hollow dome of rock crystal. “It’s, like, the apotheosis of conversation,” she exclaimed. “The diamonds are bouncing around having a little chat with you.”

The British actress, who is shooting Wes Anderson’s “The French Dispatch,” has been an ambassador for Pomellato in the past and often wears custom pieces created by Delfina Delettrez.

She also has some family heirlooms she’s fond of. “My grandmother left me a couple of brooches that I love,” she said. “They’re living, they’re creatures and they keep me good company.”

Amira Casar turned out to be a bit of an expert on Cartier: She was wearing a delicate vintage watch on her left wrist, and a chunky Cactus de Cartier bracelet on the other. “I collect old Cartier watches. This is one of mine — an old men’s Tank,” the “Call Me By Your Name” star said.

“I like for jewelry to be like a second skin. I really love Marlene Dietrich’s relationship with Cartier jewels, for example, because they were like gestures of love,” she said, noting that another favorite piece was Coco Chanel’s cigarette case, engraved with the signatures of her friends.

In recent years, Cartier has skipped couture week, choosing instead to stage presentations during the spring and fall women’s ready-to-wear presentations in Paris.

“We’re happy to return and happy to present this collection,” Vigneron said. “We’re not sure if we’ll be able to do it again next year, and that’s not necessarily the idea, but if we are going to be here during this creative week, we might as well come with something very surprising.”

Indeed, dinner was a festival of the unexpected, starting with a performance by French musician Jackson Fourgeaud, aka Jackson and his Computerband. Waiters wearing a series of disguises, including rustling tin foil suits, served each course with a fresh twist: a celeriac soup was dished up in a lab glass, and the main chicken course on a spinning plate.

Dessert came with a cardboard lid attached to an oversize silver balloon. Guests untied a satin ribbon and the cover flew off, revealing a rock-like silver creation by Pablo Gicquel, the pastry chef at Hôtel de Crillon, that turned out to be made of chocolate.

At the end of the dinner, waiters popped silver confetti cannons and gyrated to the sounds of Prince’s “Kiss,” as Swinton and Ackermann led guests in singing “Happy Birthday” to creative director and stylist Jerry Stafford, who promptly jumped up and joined their impromptu dance party.