Tilda Swinton Turns Out for ‘Only Lovers Left Alive’

Jim Jarmusch stepped through the fourth wall and into a re-created set from his newest film at Santos Party House in Manhattan on Tuesday night.

By Erik Maza and Kristen Tauer on April 3, 2014
View Slideshow 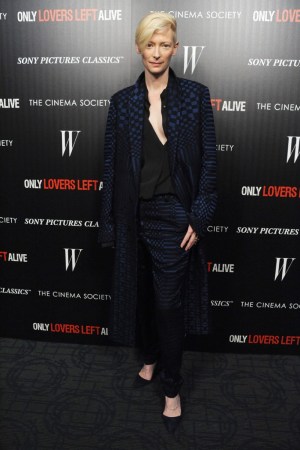 Jim Jarmusch stepped through the fourth wall and into a re-created set from his newest film, “Only Lovers Left Alive,” at Santos Party House in Manhattan on Tuesday night.

The movie stars Tilda Swinton and Tom Hiddleston as a pair of sublimely stylish vampires, and so waiters in doctor’s scrubs offered everyone who walked in shots of a red-colored drink.

“Taste of blood?” one staffer said. It was actually mulled wine.

Despite the immersive intent of the party, the real attraction was a performance by the director’s band, Sqürl, which had been preceded by a handful of other acts, like Jozef van Wissem, Zola Jesus and Yasmine Hamdan. The movie actually premiered last month at Landmark Sunshine Cinema at a screening sponsored by the  Cinema Society and W magazine, which was attended by Swinton. The film was the third collaboration between the actress and Jarmusch, though she has been a fan for much longer, since she saw his 1984 hipster classic, “Stranger Than Paradise.”

“He showed us the first American independent film shot from the point of view of an alien. Because he’s really an American alien. I mean that in the highest complimentary sense of the word,” she said. “Stranger” is actually turning 30 this year, not that the filmmaker has noticed.

“I’m not big on looking back,” he said. “I don’t even see my films ever again once I’m done with them.”