The watch brand drew a crowd of luminaries for the 40th anniversary of its Royal Oak timepiece. 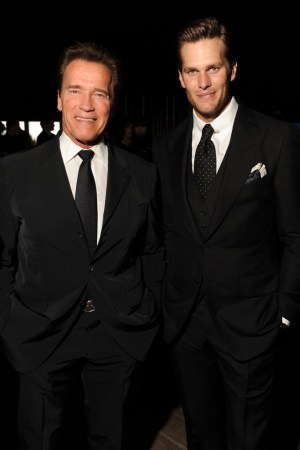 The brand feted the watch’s 40th anniversary in style Wednesday at the Park Avenue Armory in New York, where an exhibition devoted to the Royal Oak inhabited the venue’s Wade Thompson Drill Hall, where cocktails were held, followed by an Olivier Cheng-catered dinner.

Swizz Beatz made his way down the red carpet in an eye-catching pair of studded, monogrammed loafers by Christian Louboutin.

“We just did the Crazy Horse in Paris,” the musician said, referring to his collaboration with the designer. “Nobody expected us to get together and do that.”

While Beatz talked about his penchant for collecting, Schwarzenegger made a beeline past the assembled press and Brady, who rolled up the sleeve of his Tom Ford suit to reveal his own Audemars Piguet model.

“I have several [Audemars Piguet] watches. It’s the one piece of jewelry men do wear,” said Brady, who blushed when asked if he had been as interested in fashion before he met his wife, supermodel Gisele Bündchen.

“That’s the same question she asks me,” he said. “Yes, I just didn’t have as many bucks in my pocket then. Now, I can afford nicer clothes. I think I’ve always had an eye for it. Maybe a little bit of my creativity comes out in the way I dress.”